When I left in the morning it was definitley Setsubun, the icy arctic cold was gone. 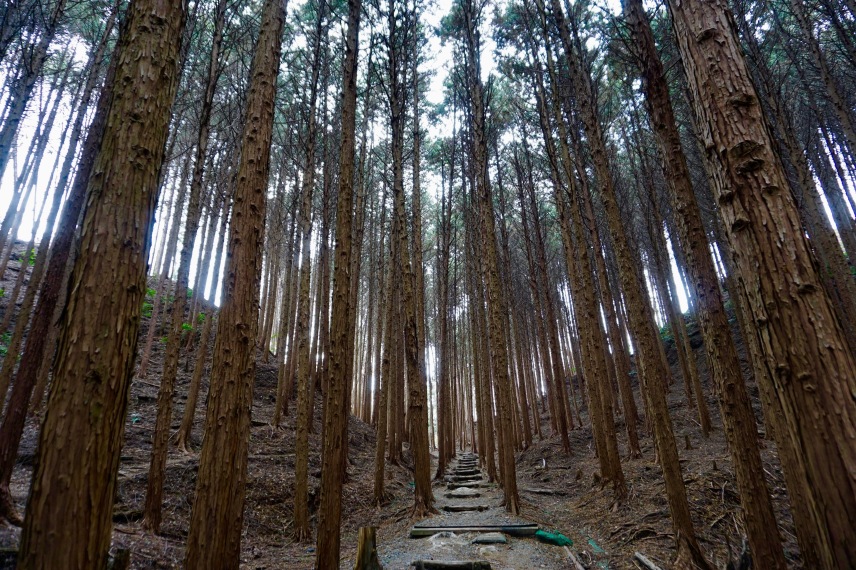 Together with two of my flatmates we arrived at the meeting point. We took the train to Tsuda station. Several other people met us on the way or in Tsuda, respectively. It became routine so far. Like always, people who signed up didn’t come and people who hadn’t signed up came in the end. Interestingly the travellers tend to sign up, but not come in the end. But this time there was one traveler who managed to come. This trail was Lee’s suggestion and supposed to be a realxed one, the perfect choice after last 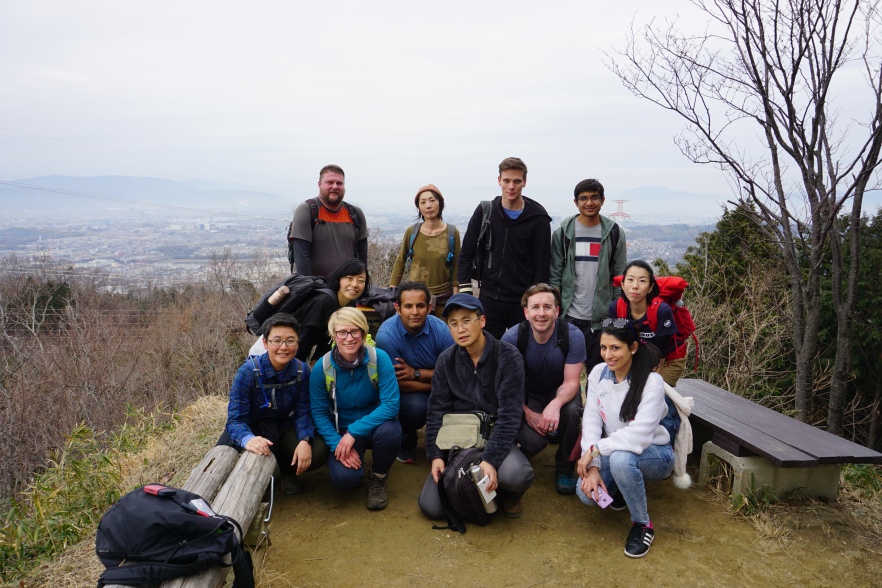 week’s adventure. After passing the residental area a small trail guided us into a nicely forest up to a viewpoint where we could see the city of Hirakata. It continued on small paths without any steep elevation and since we were much more people than usually we had a lot to talk to each other. You might know that I imported this events from Düsseldorf and during the last weeks I had to realize this event is much different and it won’t be like there. At the beginning I was disappointed, but now I like the it very much. The main difference is mostly the trail itself. Around Düsseldorf exist only small parks within 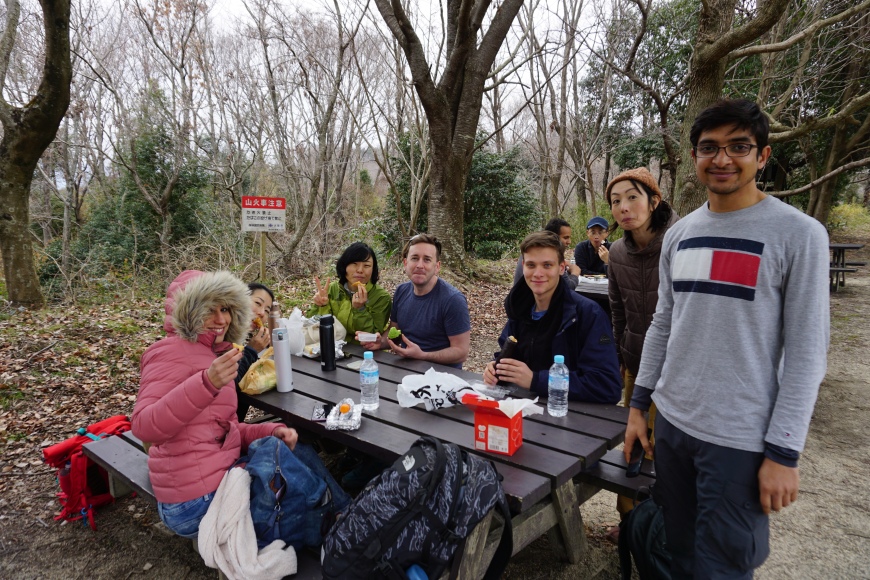 residental areas and the hikes are more likely a long Sunday’s walk without any challenges. But here in Japan there are amazing mountains which are challenging us and give us an adventurous real hiking experience. Also the number of participants is quite different, in the end there were up to 50 people each time and it was not enjoyable anymore. Also the hikes became quite the same every week. In the end I just continued, because the people became my friends and I loved spending time with them. At the beginning of this journey I was always imaging 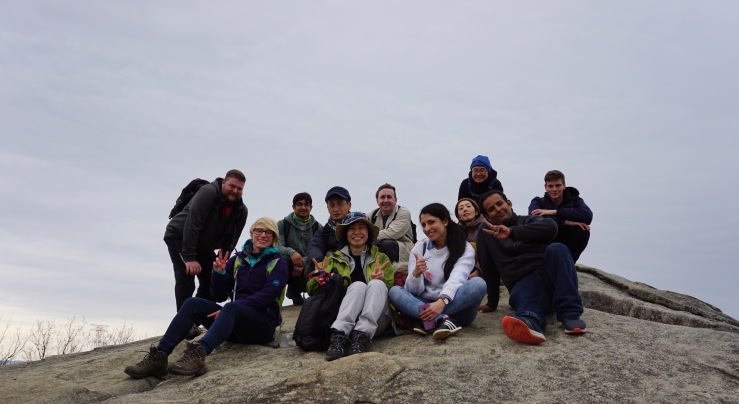 what the Düsseldorf group is doing right now and I missed them a lot. Sometimes it was really painful. I haven’t had this thoughts for weeks, but today. Since today’s trail was very easy and the number of people quite high I felt like in Düsseldorf, especially when the trail

guided us through a park with naked and sad looking trees and a small lake. We made a break at a picnic place and this in this scenery I felt even more thrown back. This break was the first one which was enjoyable due to the temperature and we lasted longer than usual. When we continued we had to climb a lot of stairs which guided us on top of Mt. Katano. It was a scenery like in The Lion King and on top we had an amazing view. We took a bunch of pictures there and enjoyed. On this heavy rock I saw Hirakata and my beloved Osaka. Again I could see Abeno Harukas (Japan’s tallest building), the place

where I live. Happiness flooded my body, yes I’m living in Japan and this is exactly where I want to be right now. I don’t regret anything. I love my new life and I don’t miss my old one anymore. Thing are different, and this is essential. We continued hiking and after several up and downs we walked along a forest street. Usually Osaka delights me with clear blue sky and sunshine, but not today. It became grey and the clouds lost heavy single drops. Each time the group is totally different, it is unexpectable and for some reasons we were extremely slowly today.

I don’t understood, because there were almost any elevations or difficulties. They tend to stop every few meters and it was hard to keep them on going. We lost two girls and I went back to pick them up. So we lost even more time and I realised we wouldn’t be able to

arrive at the bridge during daytime. After we passed a fairytale like path next to a small river there was a junction with the opportunity to take a shortcut and go to the train station directly. In this case we would skip the bridge. I was going to let the group decide and no matter how they decide I would follow them, even though my heart said continuing. I had last week’s lesson in mind and I wouldn’t leave the group again or force them to keep on going. To my very big surprise they voted unanimously for continuing. I was extremely happy. The trail guided us on a street across a golf club and a guy forbid us to walk

ahead using the official street. We should go outside. Well,this meant a lot of extra kilometres and was not agreeable with our schedule. We walked around the club house and back on the street. Sometimes I struggle to follow rules, especially if there’s any logical explanation missing or coming 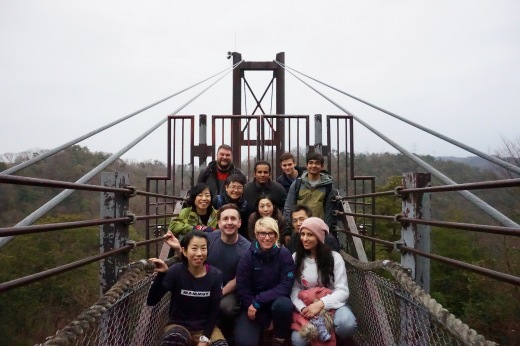 from an inofficial source. While Japanese’s nature is might to follow, I usually just go on. I mean I would never violating law, but I couldn’t accept not using this official road for 500 m while many other people do exact the same and I also couldn’t see any sign. The group stopped for a moment, obviously not happy with my decision, only Tomal was with me. But in the end they just followed. I tried to hurry them up, because I admit I felt uncomfortable. But they kept their relaxed pace. We left the street and finally we entered the park where the famous Hoshi no Buranko bridge, Japan’s biggest suspension bridge which uses wooden panels, was located. It went up extremely steep. Today’s last challenge. The grey sky went almost dark when we arrived at the bridge.

Unfortunately the bridge was closed. We were 15 min too late. That was bitter. Yes, in Japan they close bridges at 16:30 pm. Everybody took it relaxed and at least we had a reason to come back, maybe when the sky is blue again. We arrived the train station in darkness and it was starting to rain on the meters. Some people left at different stations, while the rest of us was going for having Ramen together. It seems like an upcoming tradition to go for dinner after the hikes and I really appreciate it. The hot Ramen was exactly what I needed and I really enjoyed hanging out with them. When I was lying in my bed, I smiled and fell asleep immediately. This is not the Düsseldorf feeling anymore. It’s was the Japan feeling. I live in Osaka right now. Able to live my dreams.