Summer is over. This weekend was the weekend of saying goodbye. It started on Friday with my farewell party at home. Since the party was very spontaneously, I was touched how many people show up in the end even coming from places far away. In the end there were like 30 people and the garden was full and busy. I was so happy to see each of you.

On Saturday there was movie session at Sam’s place and I choose to see “My neighbour Totoro”. I was really excited to see this movie, cause it was recommended to me several times while it was about a cat-like fantasy animal and it was Japanese Anime. I loved the movie and we had a very nice evening afterwards. On Sunday I was joining the hike like every week, which was going to Essen. The weather forecast was horribly and so the

weather was. It was raining all the time and it was quiet cold. Half of the people left after the break, so in the end we were just nine people. Since one year I’m joining the Sunday hike almost every week and by now I cannot imagine that I won’t be there next week. Most of the people became real friends. All the people in this group have a decisive commonality,  they left their native country to live abroad and make new experiences. Although it was always fixed for me to leave Germany after my studies, it is still a huge step for a scared cat like me. Meeting all of you let me grow and made me stronger and braver, so that in the end I feel rather excited than scared. Thank you for widening my horizon. I spent Sunday evening with Mami, Karina and Albert. We went to a Chinese restaurant and did some nonsense back at Karina’s place. I almost spent the whole summer with them and surely it was the summer of my life. I know we will see each other soon, but it won’t be like this summer anymore. My mind it full of beautiful 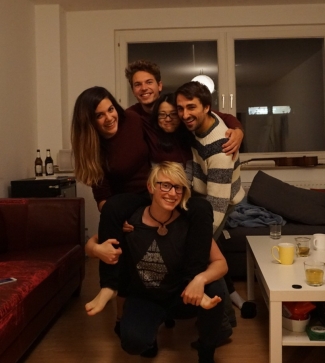 moments with you, which will always cheer me up and make me laugh. I’m really looking forward to continue doing this delightful nonsense with you. No matter where or when. Saying goodbye to Albert and Mami was quiet hard, but still I hadn’t left Düsseldorf. Next morning I had to say goodbye to Sam and Karina and I couldn’t hold on my emotions anymore. I started crying while leaving. Unfortunately all trains in direction to Duisburg were cancelled for hours, but I couldn’t go back to Karina’s and saying goodbye a second time. It was like they don’t wanted to let me go… On the ride on my bike back home from train station I could feel the cold of autumn. Summer is over now and it’s time to go. Next time I cycle I will do it in Japan!!!

Packing! I already have a lot experience about what might be useful on outdoor 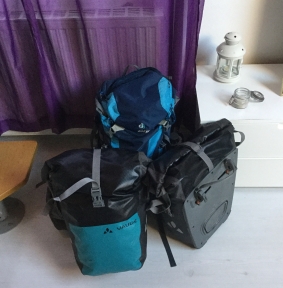 adventures and what not. But this time it’s a bit tricky. Emirates allows me to take my bike within the free luggage, if I don’t exceed the total weight. Sounds nice. I’m allowed to take 30 kg of baggage plus 7 kg of cabin luggage. I already packed my bike several times for taking it on a flight and I always forget how exactly it works in the end. At 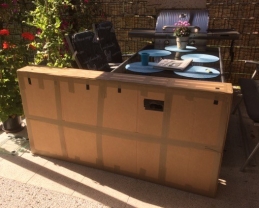 least it disappeared in its card box. The fully packed bike weights 21 kg. So 16 kg left for my entire stuff including bike bags, tent, camping stuff, laptop, hiking backpack, tools and clothes for one year. I still have around 2 kg to much, which means I will wear half of my clothes in the airplane. Let’s see if I can manage to cheat ^^

It’s a funny feeling, exactly three years ago I sat at the lighthouse in Finisterre, watching the sunset and was celebrated the end of my Camino journey which means to start a new life. Now, at the same date and at the same time I’m sitting at the airport waiting for my flight to Japan… By the way checking in was quiet easy and nobody cared about the weight.

I AM IN JAPAN! The flight was very smooth and time was just running. I couldn’t sleep in the plane, so I was very tired when I arrived. I got a Card of residence which allows me 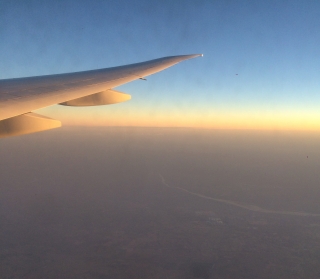 to stay for one year in Japan. My bike bags just arrived in time at the baggage claim. Now I needed to find my bike. There was no baggage claim for bulky luggage, but at the counter there was a lady waiting with the bike for. Directly in front of the airport were taxi, so I decided to might take a taxi. The stuff coordinated all taxis, so everything went extremely quickly. The ordered a large one for me. I also met another guy, who had also a bike with him, but everything went that quick so we couldn’t talk. Since the price was ok, I decided to take it, because it was already night, I was tired and I don’t know if the bike might be damaged. I would built it up tomorrow. I was laying in bed around 2 pm. I was happy, I was in JAPAN!

Jetlag! I woke up first time around 8 am, but couldn’t get up. I slept until 12 and could hardly leave the bed. My Japanese SIM card, I ordered in Germany was more working 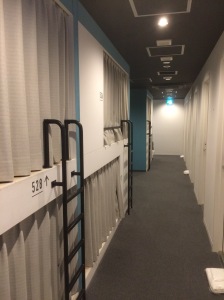 then me. I went downstairs to unpack my bike. The girls from stuff couldn’t believe their eyes. They have never heard about taking a bike overseas in the plane. The cardbox was not damaged and on the first sight everything was alright, but then I realized the front wheel was not running, because the wheel’s disc was bent. Impossible to fix. The stuff was quiet nice and looked for a nearby bike shop. It was raining. And it was quit funny, every single person was carrying an umbrella. I was the only only one in the streets without any. Even people on bikes were carrying umbrellas while cycling. And honestly it wasn’t raining that much. Surprisingly everybody was carrying the same model of umbrella. The bike shop was in the 5th floor of a mall.
The mall was more like a gigantic Karstadt and I felt very uncomfortable to enter with a dripping bike. I had no choice and

nobody said anything to me. In the bike shop they had the spare part and fixed it within an hour. Enough time for me to get a first sight of Japan. I was hungry. I hadn’t any breakfast and it was already after 3 pm. I bought a rice ball and bought it in Japanese. I’m sure she didn’t understood it, but was smiling at me. I loved that rice ball and I’m really looking forward to have them regularly for breakfast. After picking up the bike I brought it back to the hostel and went out to the city center again. It was already dark. I just walked through the streets, explored the area and bought some stuff like soap. I wanted to eat soup for dinner and I’m not able to read that much kanji’s yet. So it was quiet difficult, but luckily it’s common that restaurants have pictures of their food in the windows. Slurping soup felt strange but was also fun. I can imagine that after my stay in Japan I’ll get into trouble at future dinners with my parents. I was wondering most today that it was busy all the time during day. And I was wondering about the amount of shops.

It was crazy. It’s might be because of the size of city which is not compareable to the place I live in Germany. I’m courteous how it looks like in smaller cities. And everything is shining and bright. I like it. In Japan it’s necessary to register your bike, because the police is checking the ownership. I read about it and Sam told me before as well. Usually they do it in a bike shop, but unfortunately it was not possible. With a resident card it’s theoretically possible for foreigners to register a foreign bike, but not without an address. So I went to the local police station. It was funny, there was neither a queue nor screaming people who are led. They couldn’t help me neither, but noted the serial number and my name on a serious looking sheet, which I shall show to the policemen if I get into trouble.

Thyphoon. A guy from Couchsurfing told me about Typhoon Trami will hit Tokyo on Sunday. I asked the hostel stuff if it would be that dangerous to cycle early in the morning.he forecast said it will hit around noon. I couldn’t let my bike in Kawasaki and I got an invitation via Couchsurfing and really wanted to got to Tokyo and socialize. So I 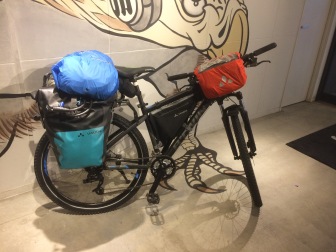 prepared all my stuff and woke up early in the morning. It was cloudy and rainy and I started cycling around half past eight. I bought two rice balls for breakfast and was very hungry. It was really hard to find a public bench to make a short brake. I tried to cycle fast, because I was really afraid f the typhoon, but I got the feeling not to make a lot of kilometers. At the beginning I only cycled on the pavement, but it was that inefficient, so I tried to cycle on the road. Even though it was a main road it was quiet ok and Japanese drivers took care. I arrived my Couchsurfing place in the morning. Almost dry. Hiro picked me up. He is living in a huge house with his three flatmates and cats. We spent the evening together, talking, drinking tea and he showed me around to a Mall to get some food. It

was an awkward moment, when we found out coincidentally that he also knows Sams. We couldn’t believe. I mean, imagine I traveled like 7000 km and I only knew two Japanese guys, Mami and Sam, in my life and the very first local person I met knows him. They weren’t even connected by social networks or whatsoever. His first Couchsurfer was a guy from Turkey who met Sam on his way to Japan and talked about him. Later they also met on a birthday party in Tokyo randomly. This is how it goes. In the evening Hiro’s flatmates were joining and we started drinking Sake and playing drinking games. The game was as simple as Looping Lui and we got drunken very fast. I think there’s a second issue about a typhoon: people stay at home and get drunk!