Cycling Awaji. The last long weekend before winter was approaching. Due to my ankle injury I had 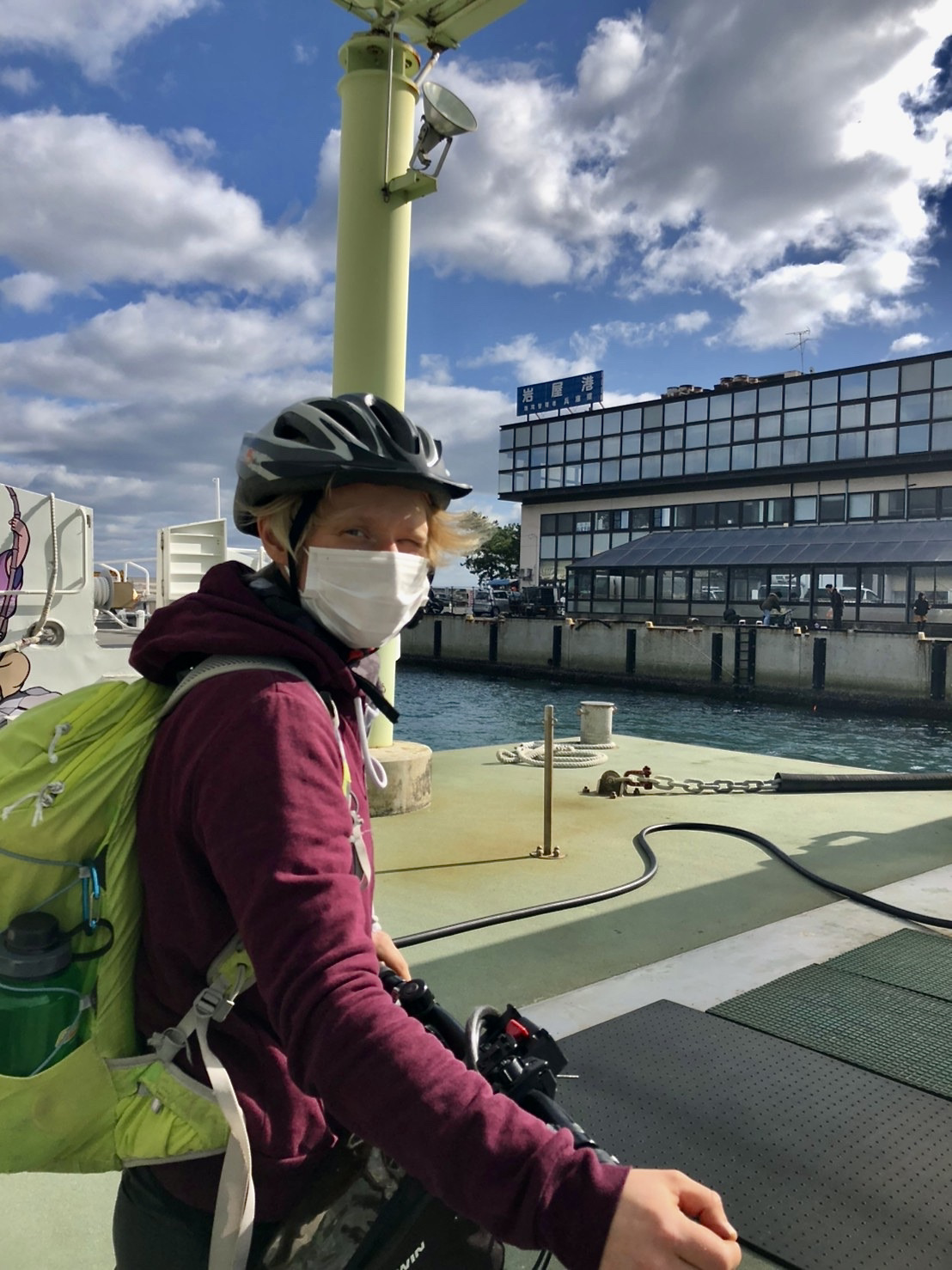 to skip all hiking activities and postponed a winter trip to Japanese alps to next year. Since I arrived in Osaka I was keen to cycle around Awaji island, a rather small island located in Osaka bay connecting the main islands of Honshu and Shikoku. There are several benefits, it’s an easy access and with its 150 km loop perfectly made for a three day trip. Also Yoshi, Sayaka and me were keen to for another cycling adventure this year. In the last minute Sayaka needed to work, but decided to join us from Sunday morning arriving via bus. While the entire week was extraordinary warm and sunny, the Saturday morning started cold and grey. I left my house in the morning with the cold air blowing into my face wondering how the next night would feel. It’s my third bicycle on the train tour this year and the level of stress dropped a lot. Within minutes my bike disappeared in its bag and I found myself on the train. I met Yoshi at Akashi Station and helped her to build up her bike. The time schedule was a bit

tight, but we arrived the Ferry terminal in time. It’s a very quick ride to substitute the impressive Akashi bridge and soon we arrived on Awaji Island. I have already cycled one third, and this time we decided to cycle anticlockwise. The air was cold and fresh and my body felt stiff, but after a few kilometres and first views of the ocean next to us I got warm und happy. I was unmotivated after a busy week of work, but right now I felt pure happiness to be outside and have

the Ocean next to me. Soon the sky cleared and sun beams were touching our skin. After 20 km cycling directly next to the Ocean our stomachs were craving for lunch. We decided to go for Okonomiaki (kind of hearty pancakes), the most famous dish of Osaka. Indeed, the Okonomiaki tasted different and it was impressive how exactly Yoshi could point out the differences. It was a cozy and warm place, back on the bicycle I felt cold and tired. But only for a short time. In the

afternoon we suddenly got a message from Sayaka saying she finished earlier and would join us already this night. This were amazing news! After a well deserved coffee break in the sun we were 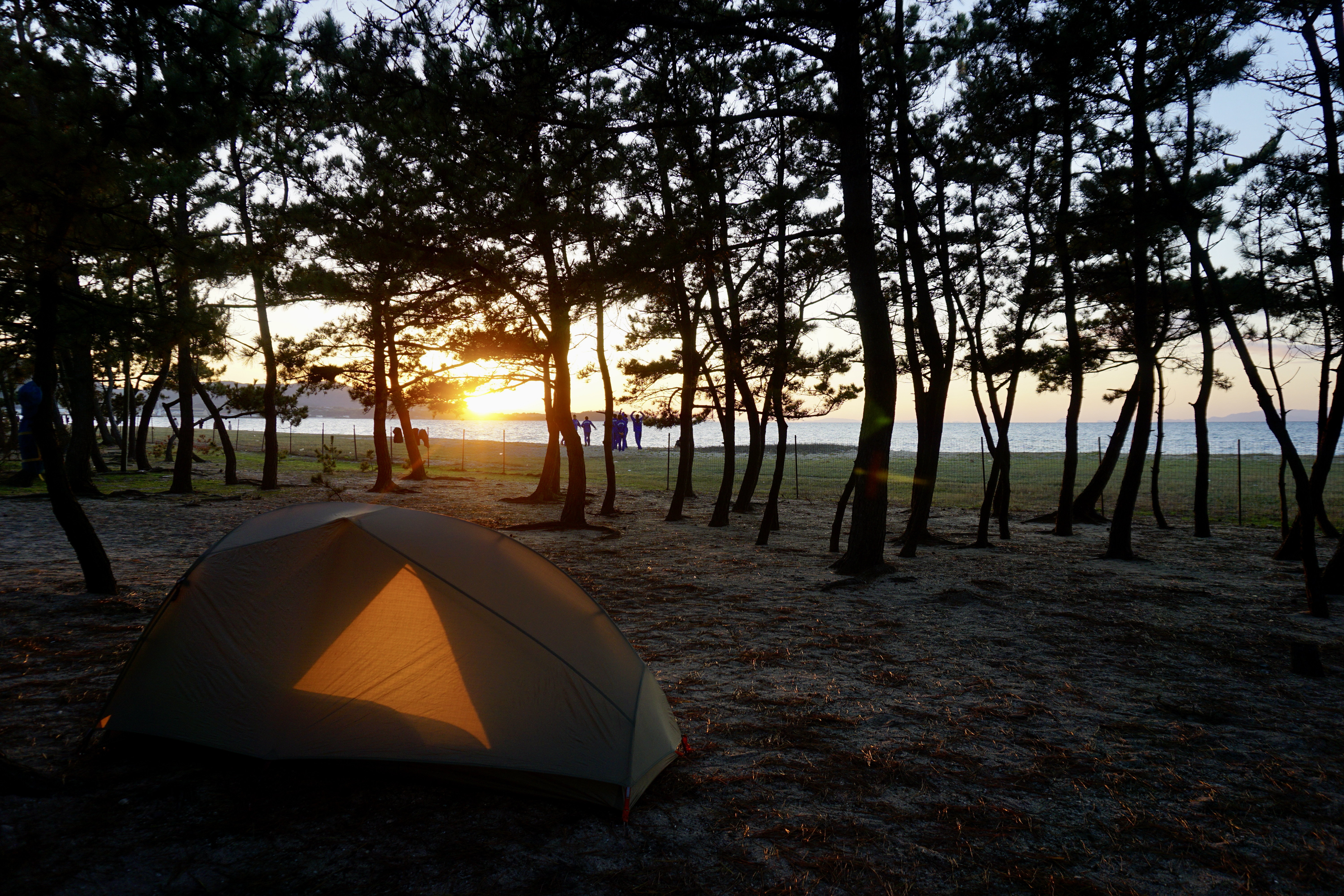 motivated to head to today’s final destination. We headed to a beach around Minamiawaji which was also pointed out as a local campsite. Sayaka warned us that it would be closed, but we had no other choice anyway and had to check it out. The beach was gorgeous. One of the biggest I have ever seen in Japan. A huge area of tightly planted pine trees would provide a perfect cover in the night. Unfortunately and very unlikely for Japan the facilities were closed and locked! We checked out one by one and already seated ourselves towards a hidden night without a bathroom until we 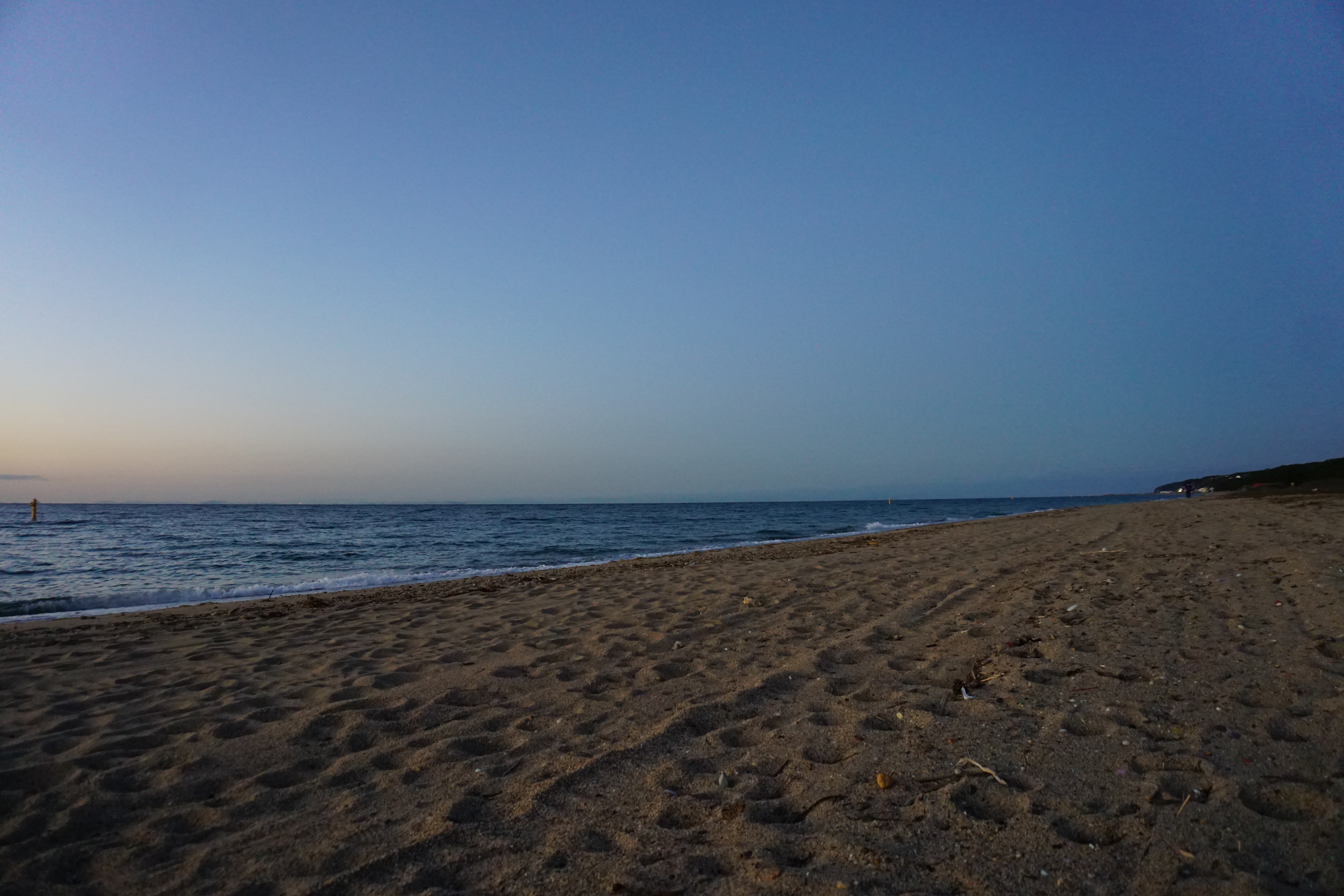 suddenly saw tents at the very end of the beach. It were large, fully equipped ones. For sure here must be an open facility somewhere. Around the parking space were facilities and some other tents. We were extremely happy, the place was just perfect. We danced around of happiness and soon started pitching our tents under the pine trees next to the beach. The sun started setting and Sayaka was about to arrive by bus. We watched the sunset over the Ocean and enjoyed the last minutes before the big red ball seemed to fall into the Ocean before heading out to meet Sayaka at 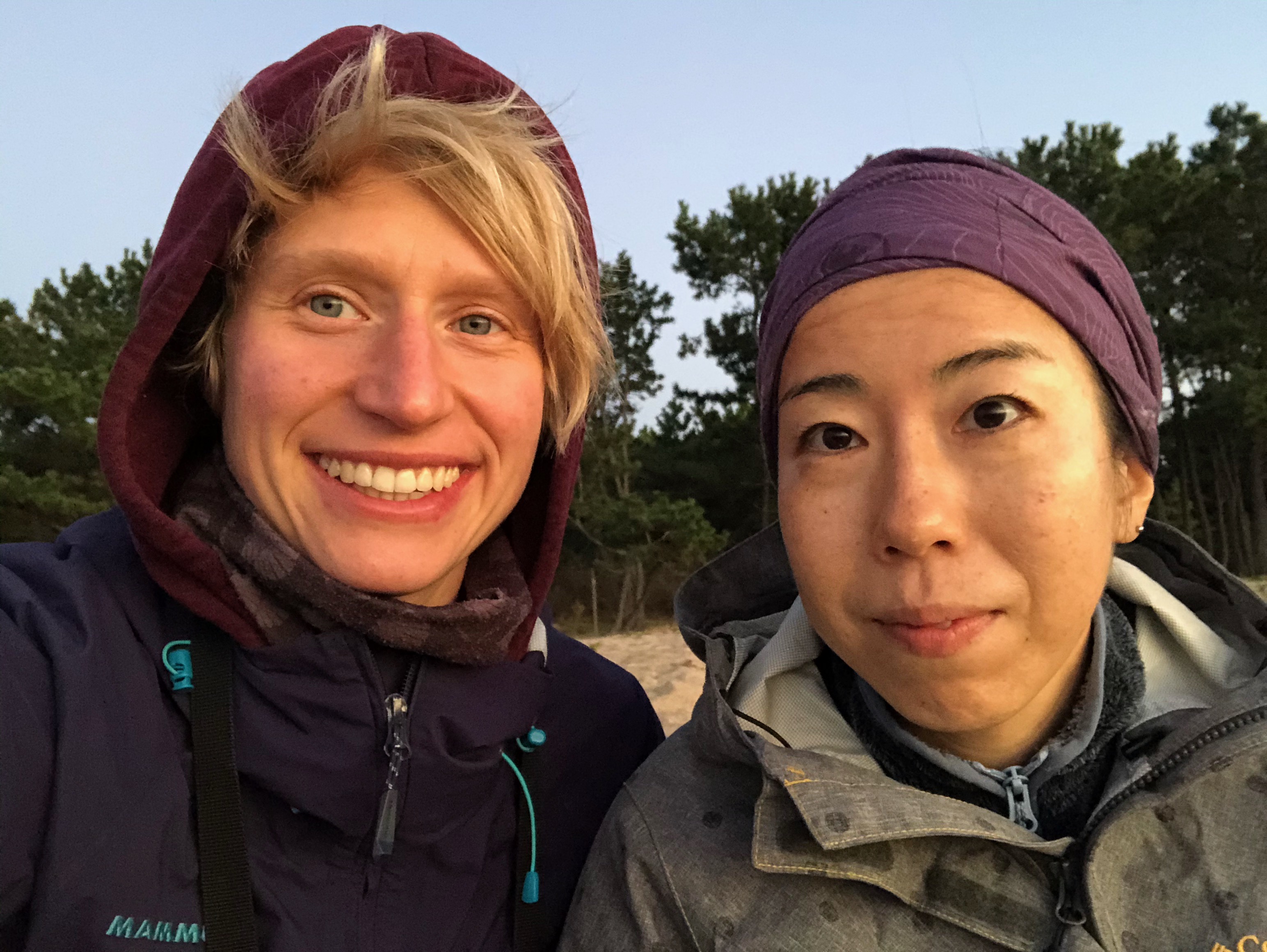 the local Onsen. I realised I really meeesed up while packing and forgot any kind of underwear. In a 100 Yen shop I got some spare ones, but the disappointed was big, when I held the tiny pants in my hands which might would have fit me as a 9 year old. Also the men’s version was too tight and I just gave up! To the amusement of my fellows. With a feeling of a new born baby and a bag full of delicious food we headed back to the campsite. It was way warmer than expected and so we could enjoy our dinner. Since it was my birthday last week we also had a cheesecake and I got a very lovely present from my dear friends: an 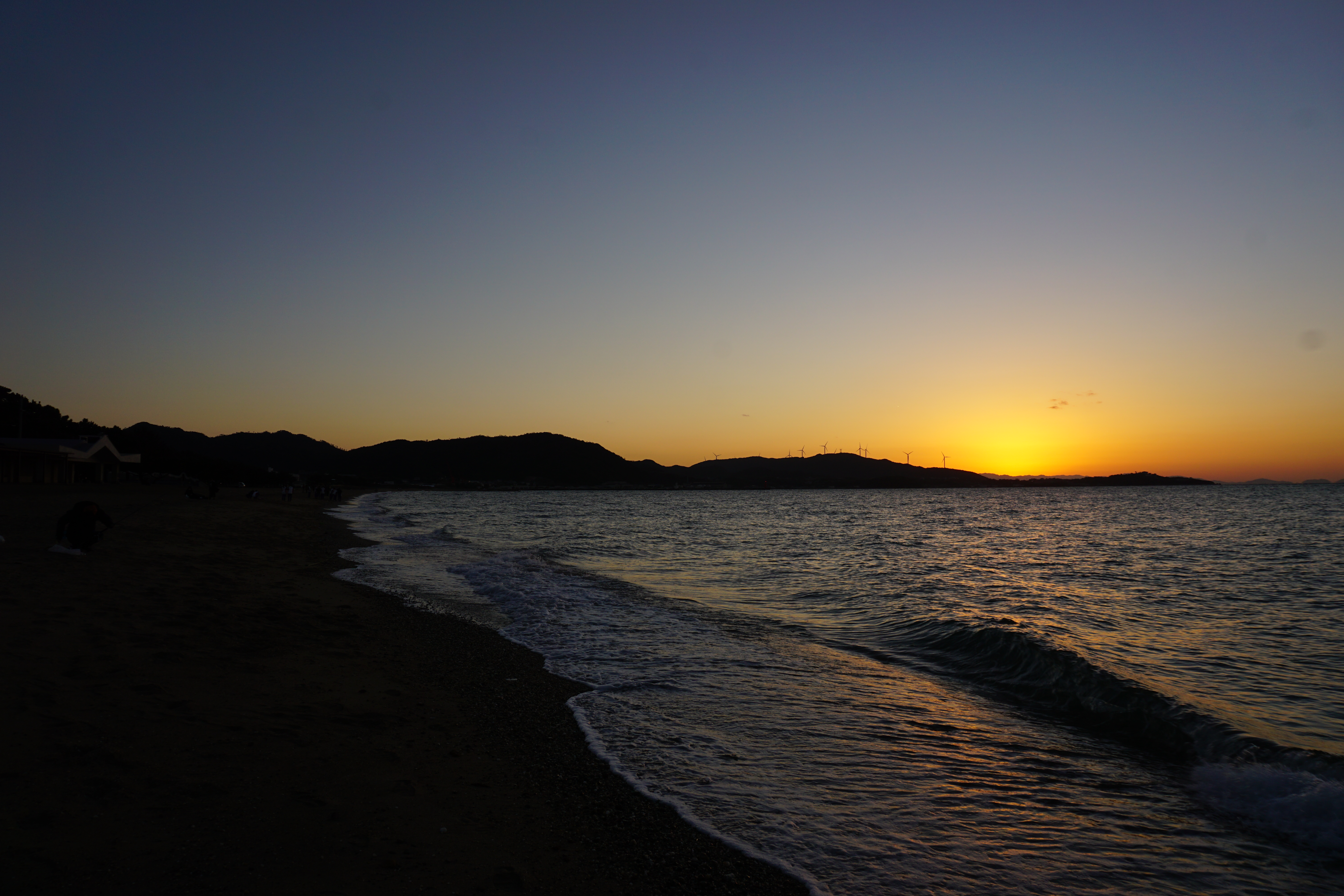 ultralight solar camping light in a cubic form, which I can Han literally everywhere. That’s exactly what we needed in this dark night. We had a pleasures time of chatting and laughing, but also were super sleepy way before midnight. I was happy to slip into my sleeping, freshly bathed, full with good food and just enjoying to be able to sleep outside with my friends around me. I heard the ocean and before I could focus listening I already fell asleep.

As usually I woke up by the sounds of fellows strolling around. Coffee smell came to my nose and

motivated me to slip out of my sleeping bag into the sunny morning. The night wasn’t cold I had the pleasure of a good deep sleep. I like camping with Sayaka and Yoshi, without any speaking we are naturally a good team and our body rhythms just fit. We had a nice breakfast together while the sunbeams broke the shadow of the pine trees. The Ocean was as blue as the sky and in this environment one could only feel happy. Soon we had packed all our stuff, loaded the

bikes and headed out into a promising day. Within minutes we left the city behind and entered Japan’s rural countryside. Sometimes life in Osaka is stressing me and those are the moments I remember why I love Japan so much and all the emotions are coming back. We cycled along the Ocean on this perfect day. Here and there we made brief stops to enjoy the view. We decided to have lunch at a Michi no Eki (roadstation) at the very southern point of the

island. The way up there was challenging with many climbs, but also tickling slopes as well. The few

kilometres were the worst and our bodies were craving for fuel. Finally we arrived at the Michi no Eki and we were shocked. It was packed with tourist. For sure the reason was the amazing view of the Ocean and the gorgeous bridge connecting Awaji Island with the city of Naruto on Shikoku. Unfortunately this wasn’t a common road station, where they offer simple food like Udon noodle. There was only a fancy Sushi restaurant and a burger shop. And for

sure loads of Omiyage. The line for burgers was the longest I have ever seen, but since I was starving and not motivated fo cold raw fish, I acted very Japanese and just lined up and not even caring. It took an hour until we finally arrived at the cashier and 14 out of 16 different burger were sold out. It was ok since my choice was still available, but I bet the line would have been way shorter if people knew that in advance… We enjoyed our burger lunch with a great view of the bridge. Every region in Japan is famous for something and this place is famous for

Tamanegi (egg onion or just onion). So we took a funny picture at an onion monument and hoped back on our bikes. It was a wild ride down a long slope into the next village. We stoped there for a coffee while the became cloudy and the temperature dropped. It was late already and we wouldn’t have been able to cycle the coastal road to our final destination, Sumoto. So, we followed the national road cutting some major kilometres. The road was busy and exhausting, but it was the right decision. The weather was unstable and the sky just broke minutes before we arrived. The last kilometres we substitute following a countryside road through rice fields which was a really nice ending of today’s etap. At Sumoto beach we looked for a place to pitch our tents later and as last year, there wasn’t any

chance for hiding. It started raining, so we quickly headed to the next Onsen. It was a very old traditional one, with a charming feeling like in your grandma’s home. There were only two baths, a super hot one and a super cold one. Since they were next to each other, we found ourselves sitting in the cold one and dipping our arms in the hot one. I never felt as relaxed as at this moment. Rain had stopped when we left the place. We all felt sleepy and lazy, so thee decision to grab a pizza at a shop we passed was very easy made. Back at the beach we decided to build our camp in front of the beach house. It 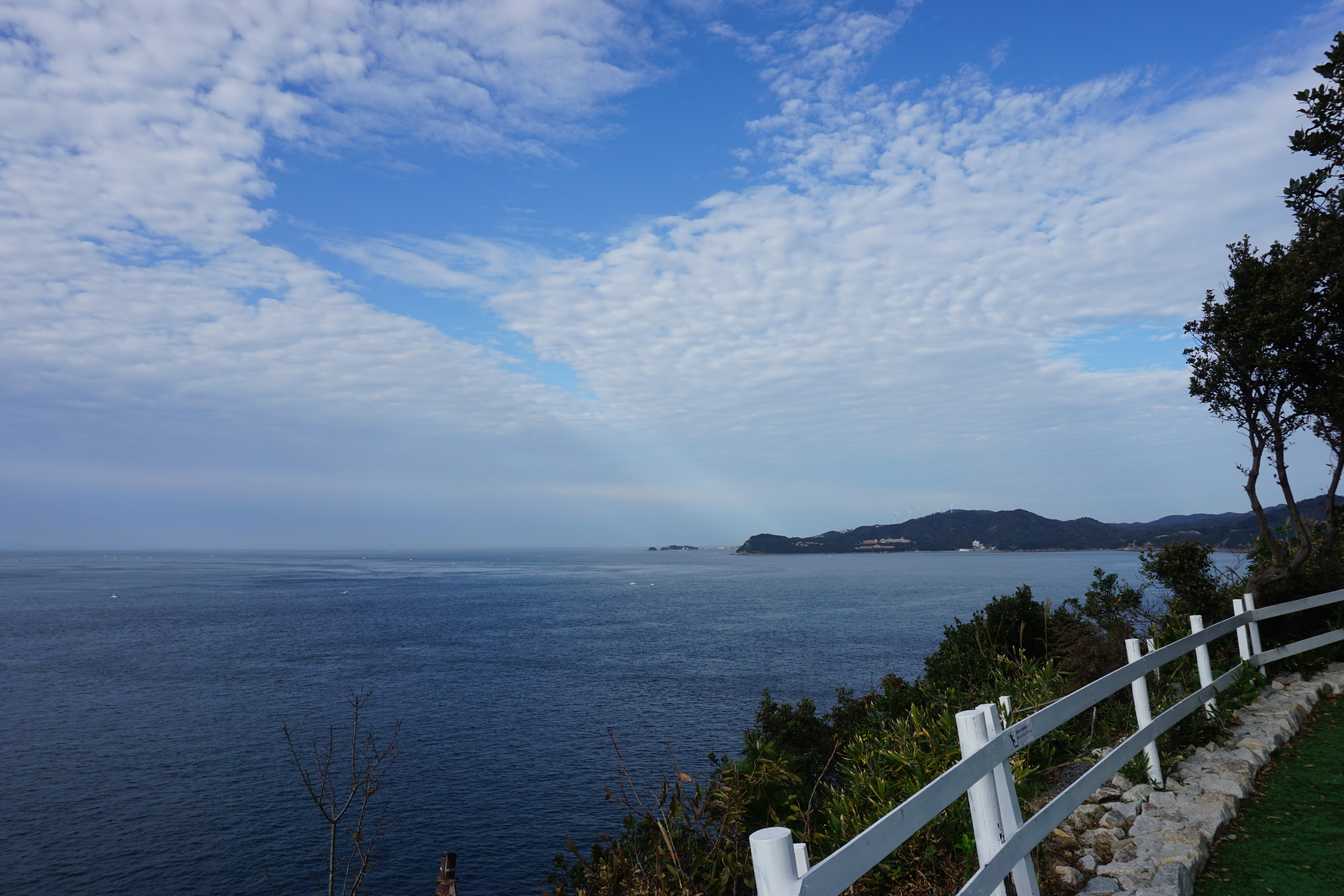 would cover us from the park and street, while on the other side was the Ocean. It was the only place providing some privacy and it felt so nice to sleep directly next to the Ocean in the sand. Actually it was the very same place I stayed a year ago. Surprisingly this night was also warmer than expected. After Pizza and cheesecake it started slightly to rain. It was perfectly timed and welcome excuse to bring our tired bodies to sleep. Within minutes I fell into a deep sleep…

The morning exactly started as the previous one. The sky was bright and blue. We had our breakfast

in the sand while watching the very first active walker and jogger. It was a pity to imagine to be back in Osaka already this night. We took our time to enjoy the last relaxed moments of the morning until we packed and loaded our bicycles, ready to head back home. The road to the ferry terminal was quite ok, but not that amazing and homogenic.  The wind was blowing strong and I constantly felt cold while cycling. We had lunch in the town of Ura in a very local restaurant and enjoying a set of Udon. I didn’t want to leave that cozy place go back into the cold again, but there 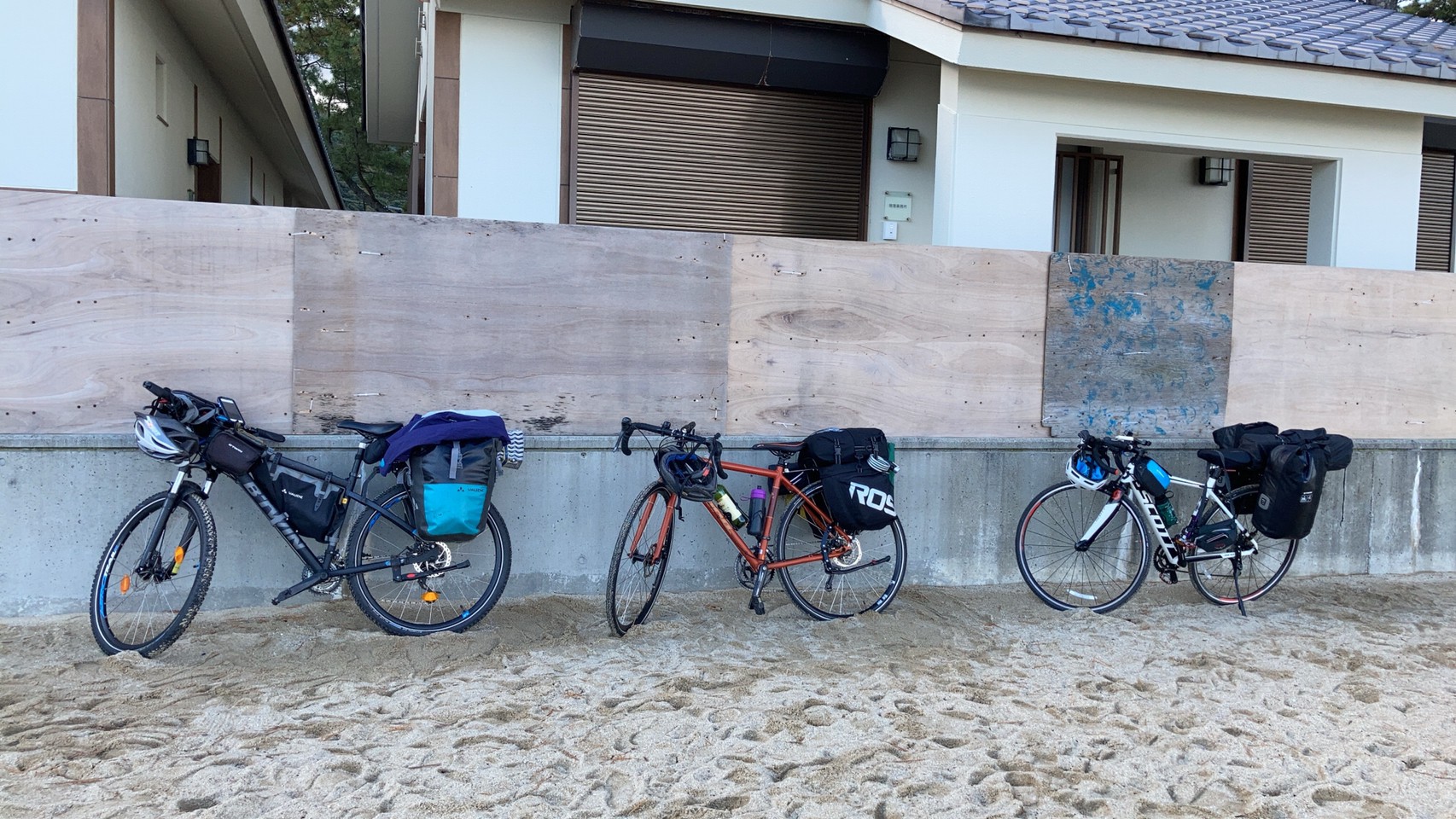 wasn’t any choice. Luckily it was just around 15 km to the ferry terminal. The ferry departed every full hour and we just missed it. We strolled around the terminal in the spare time and were happy to board. Tired and sleepy we left the ferry, went to Akashi station and packed our bicycles. Carrying the bikes into the train was smoother than expected and soon I found myself back at Shin Osaka cycling towards my house. Even though the trip was short and next door, it allowed my mind to take a rest from the recent busy everyday life and I am grateful and happy for the opportunity Japan offers to me. 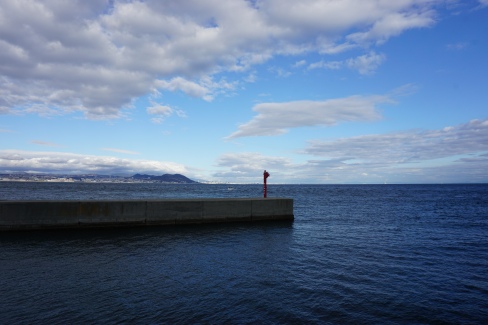