Nikolaus day. In Germany kids will clean their shoes and place them outside the door in the night. 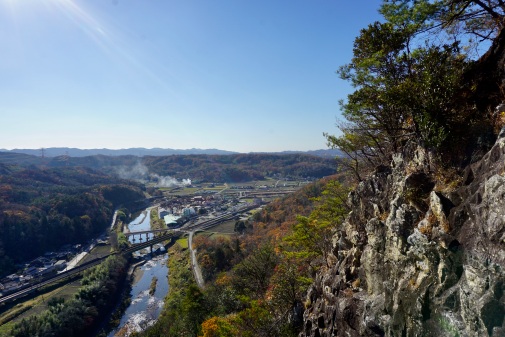 The next morning, they will be filled with chocolate, nuts and mandarines. I didn’t clean my shoes, but found some chocolate on my desk in the morning. Eating a huge chocolate Nikolaus in the morning provides a good basis for a day of climbing. Today we headed out to our very home spot at Dōjō station in the Takarazuka mountain area. The area is my very favorite one, since it has

the best hiking trails and a huge rock climbing area with several sectors within a typical charming japanese coutryside. I met Kazu in the train and soon we were climbing up the steep approach to Fudoiwa. It was a sunny day with bright blue sky and the smell of spring. The mild breeze felt unreal and both of us couldn’t stop enjoying this beautiful “winter’s day”. At the spot we met some other

members of the club and started climbing immediately. Even though I don’t like placing gear and going first, Kazu motivated me to onsight. There was no sight and I had no idea where the anchor

was. The route I started with was the very oldest one with rusty bolts everywhere and their only purpose was to comfy the climber. The route was easy and very enjoyable, but maybe not the best choice for a scaredy cat who forgets that is a rock climber while being in the wall. Soon I arrived the shiny silvery anchor and could enjoy the incrdible view of the valley from one of the highest points in the area. I also finished the route next to it and it was a nice sporty line in an excellently bolted condition I was used in that area. The nice day made me a bit lazy and so I started into the next one in toperope. I know I was able to solve it physically, but I felt mentally weak. When people seeing me climbing in the gym versus the rock they cannot believe the gap in between and I also have no explanaination. I’m not motivated to take a risk of injury and when I climbed the crux I was happy to be in toprope. We changed the sector after lunch and went to “theatre”. Usually Kazu and me are synced and today was the best example. Today was a beautiful day for climbing nices line and enjoying. We spent the afternoon climbing lines which were just enjoyable providing us withamazing views at their top. Even though I have been to this sector before, I could climb some new lines and I’m keen to finish the full sector. I was the very last one in the wall and finished my last climb during sunset. We

quickly packed our stuff and climbed down to station where we met the other group members in front of the local kiosk. It was almost dark when we entered the train back to Osaka and a very nice day of climbing ended.