Spiderwebs. I was keen to hike today’s trail for a very long time. It’s located deep in the 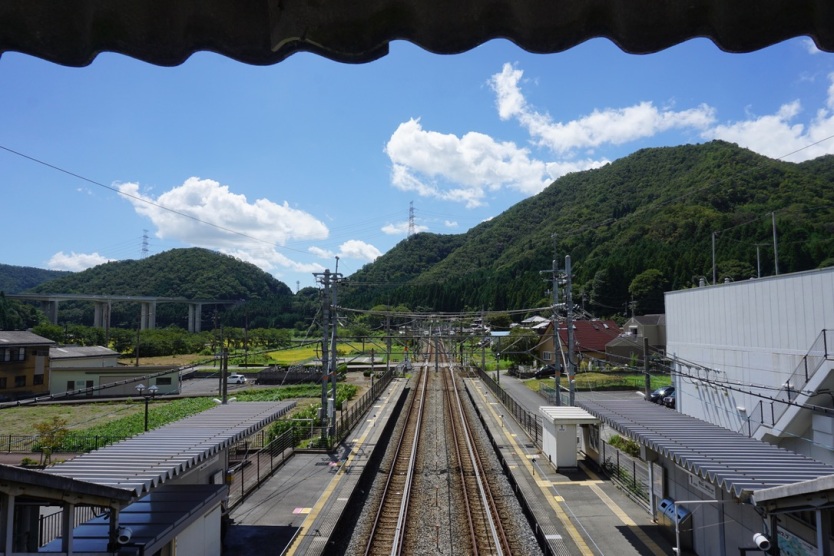 mountains of Takarazuka, where we already enjoyed the amazing mountains Oiwadake and Hundred Rock. The weather in Ōsaka isn’t stable at all. It’s typhoon season and sudden heavy rain occurred almost every day. I wanted to enjoy this trail on a sunny day, so I decided last minute hoping for the best. I expected no participants since people, so I really looked forward to spend some time on the trail on my own. But Mausam and joined and Sayaka also showed up at the Station. I couldn’t have wished for a better 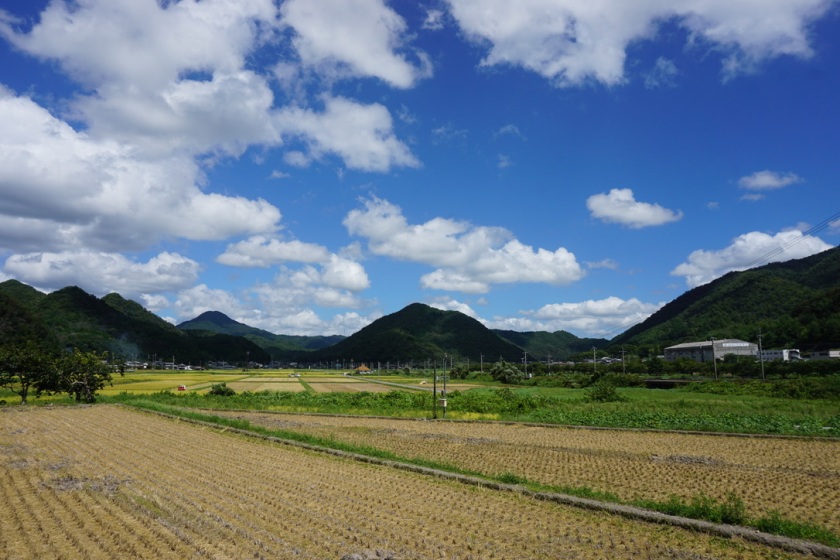 team. I the morning I overslept, but managed to get ready within half an hour and soon I found myself sitting next to Sayaka in the train heading into the Takarazuka mountains. Mausam joined while the landscape outside became wilder and wilder. The big cities’s face turned into a colourful countryside with only few houses. I still wonder nicely the countryside is connected to the city. It was a wonderful sunny day, the sky was deep blue with some fluffy clouds. The little village around Kusano Station payed in 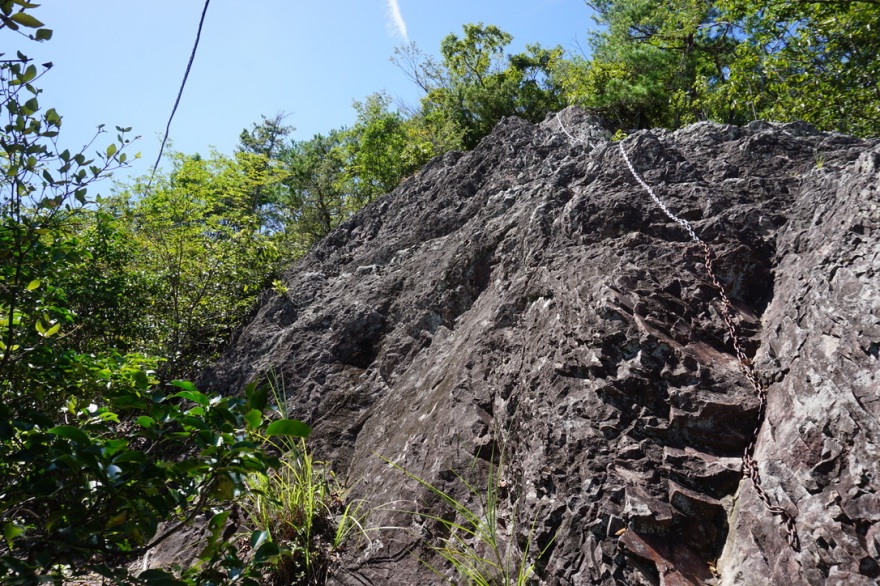 between cushy green mountains and seemed to be asleep. It was calm and and nobody was around. We walked along the streets to the trailhead while passing rice fields. The sun was warm and powerful and I could feel how its energy flooded my body. This was a promising day, I could feel it. Usually my week is very busy, after work I have a tight schedule of sports I practice and the few gaps are filled with the tasks of adult’s life. The city is pulsing and its flashing energy catches me, gives me the power to stay in 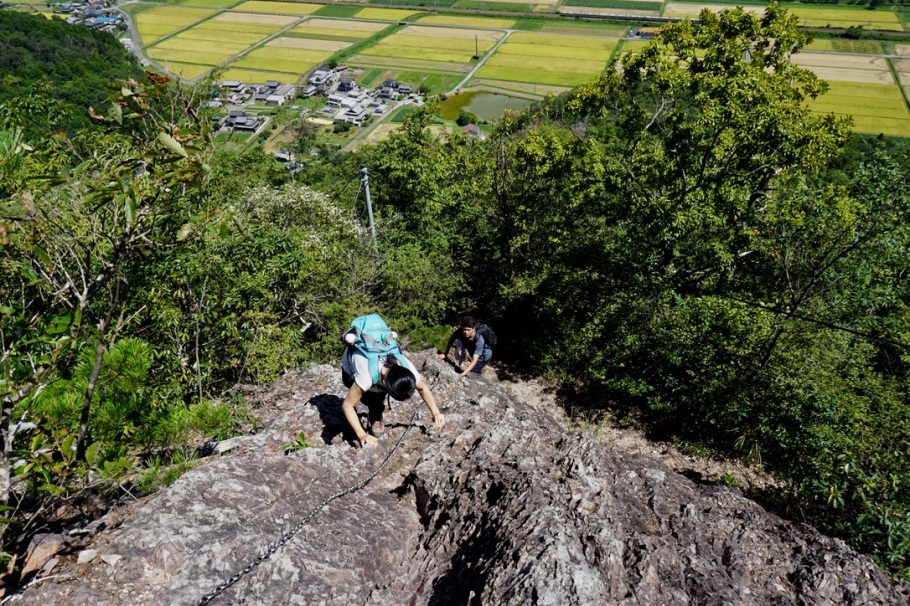 motion. But right now, the city is far away and it felt like getting off from a rollercoaster. Time stopped. Here’s another rhythm. The sun shined silently. Not even the clouds were moving. Slowly we walked through the neighbourhood. For reasons that are hidden from me the trails in this area aren’t very popular and therefore it’s condition can be very surprising. But this time it seemed we would fall into adventure at the very beginning. We couldn’t find the trailhead. We entered a small 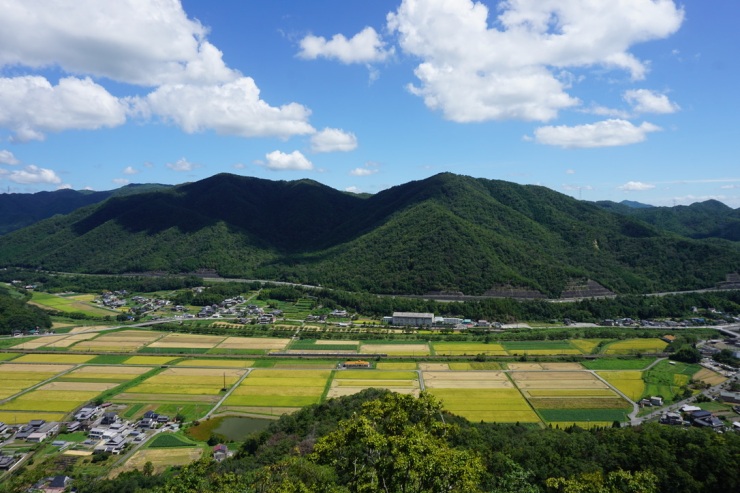 embankment on the edge and hoped to hit the trail somehow. Thanks to modern gps and smartphones we found a small path with red label within minutes. I still have no idea 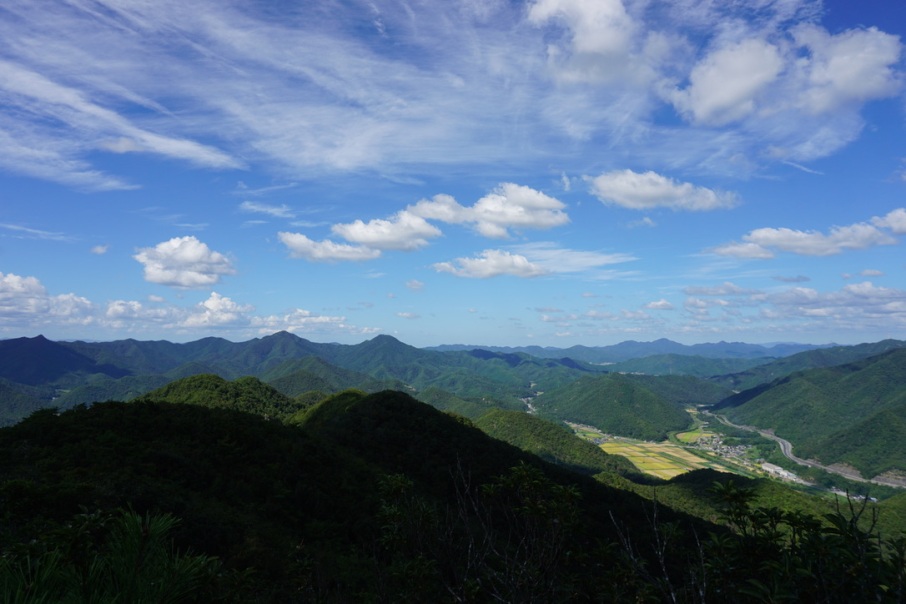 where the “real” entrance is. The hike started immediately. It went up. On a narrow super steep trail. Drops of sweat fell on the dry ground after only two minutes and soon I couldn’t see anything through my foggy glasses. This trail haven’t seen hikers for a while, it was full of spiderwebs with gorgeous green yellow spiders waiting for the next fly. Or human’s face. Unfortunately they were placed at the perfect high for a spider’s kiss. At least they are not toxic, but I doubt they become a 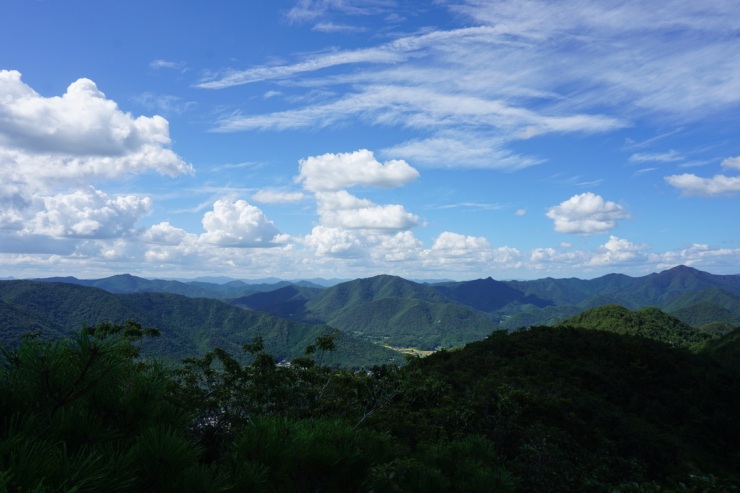 prince or princess… We gained height very fast and I hoped with every step that we would arrive the top very soon. But it didn’t seem to end. We arrived at a blank rock face 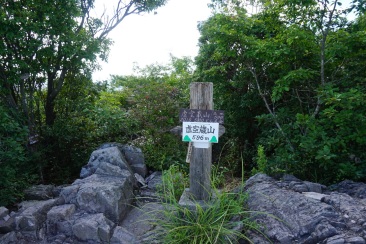 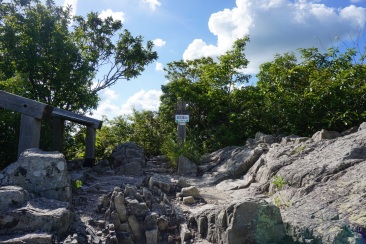 which we had to climb for around twenty meters. It was saved with a chain. On top of it we got the reward for the exhausting climb. The view was amazing. We could see the 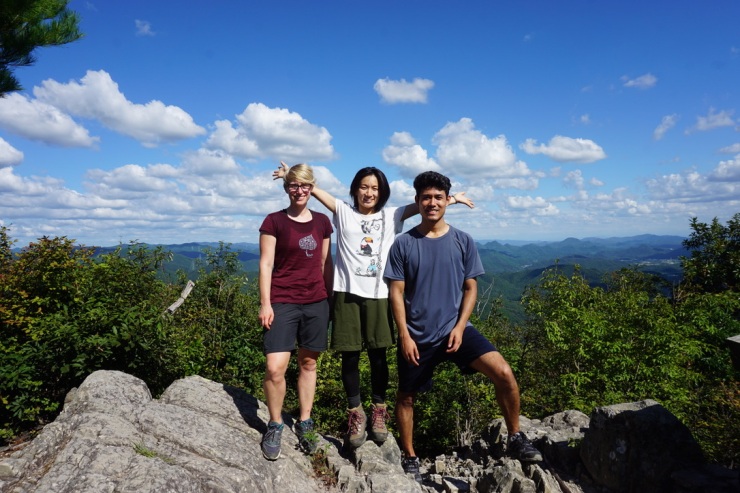 sleepy village between the mountain’s ridges. A train was slowly passing through the green and yellow patched fields. Surrounded by green mountains and blue sky. Silence. Tiredly we enjoyed the scenery unless the sun’s heat reflected by the naked stones made 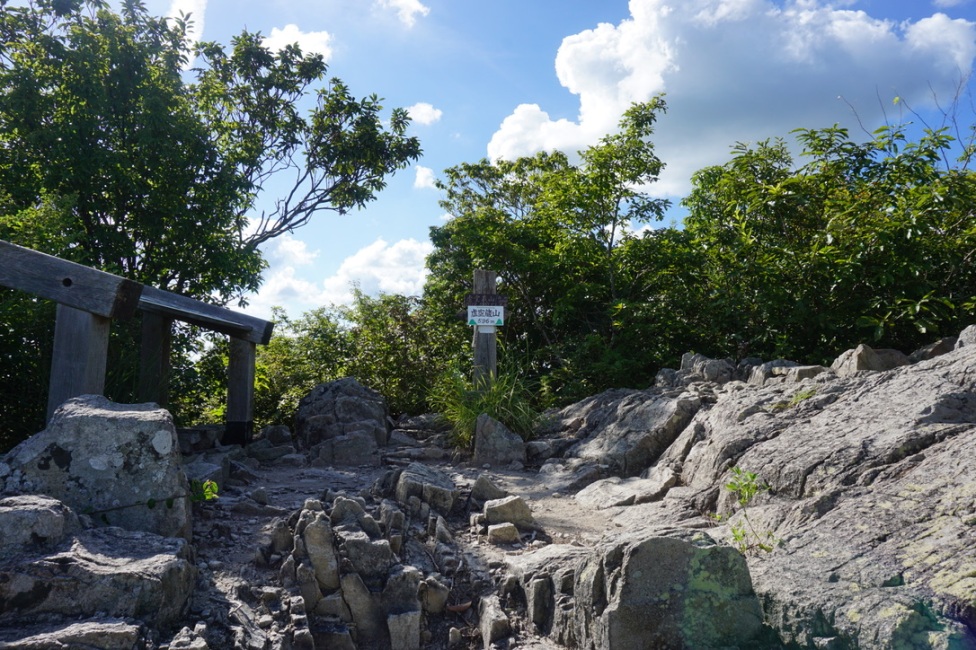 it inconvenient to stay. We continued climbing. Now, we all were armed with long sticks to avoid collecting all the spiders and carrying them up the mountains. We looked like Samurai. Silently we climbed up and luckily we arrived the top very soon. We found ourselves on a ridgeback. To both side there was a valley which looked like siblings. The path was narrow and lucky us the trees’s shadows kept protecting us from the burning sun. We were close to the sky. One thing I like most about the area is the smell of the trail. It is 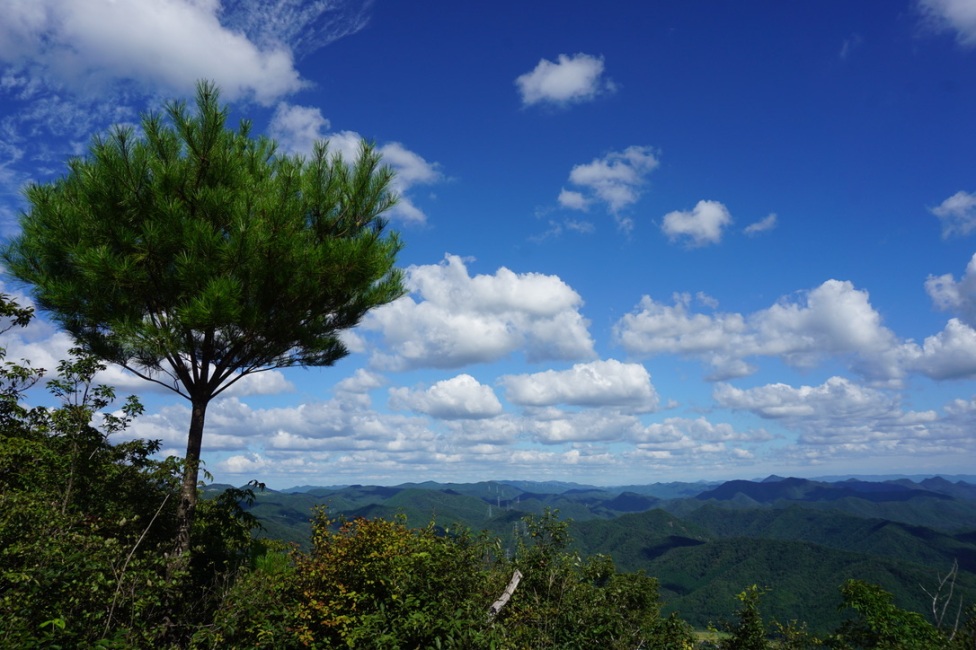 very unique. I couldn’t see many pine tress, but it kinda smelled like them. It was warm and dry smell. It always reminds me of my time in Spain and brings a deep feeling of happiness. Soon we arrived the first peak, the letters were strongly washed out, so the name of it remains a secret. Our trail was leading us down again and I wasn’t happy about it. It went as steep down as up before. Quickly we lost a lot of elevation, which we had to climb up directly. It was exhausting. Slowly, but continuously we kept climbing up. My body’s skin lost water like 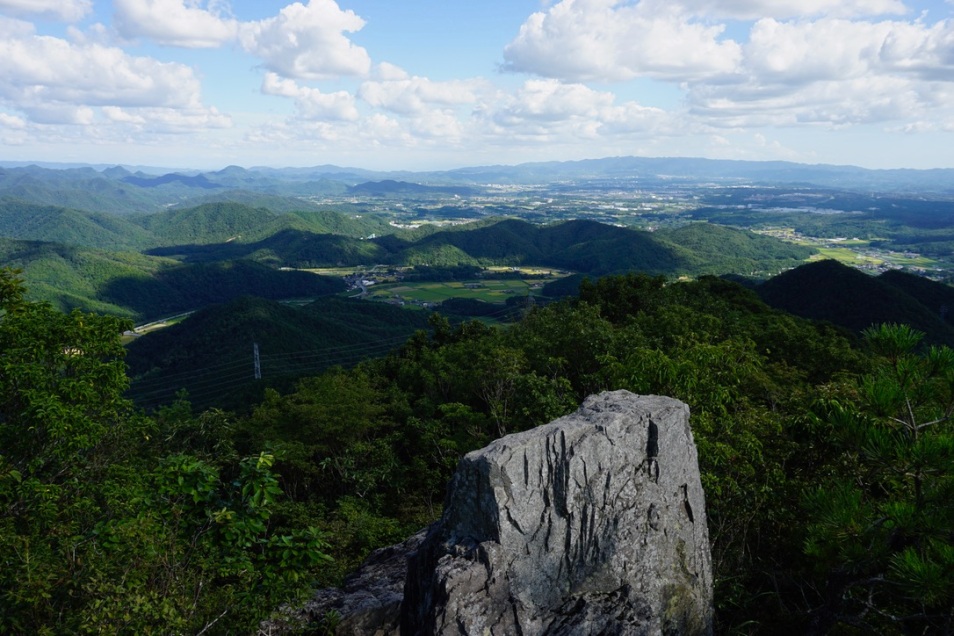 a sieve. My hair was wet and sweat dropped into my eyes. The towel which I carry always during summer couldn’t dry my body anymore. Finally we arrived the summit of Hachiojisan, where we took a break in the shadow of surrounding trees. Summer in Japan is exhausting and creates an own difficulty while being on a hike, but nature is still enjoyable. Anyway I’m looking forward to welcoming autumn soon. After climbing up for a long part our bodies got the chance to cool down during the break until we continued refreshed on the narrow 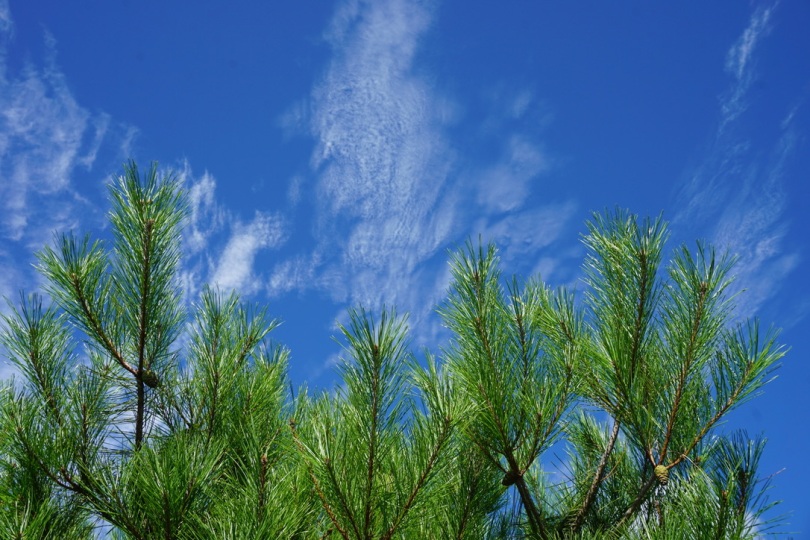 mountains’s ridgeback. It went slightly up and down while we were still Samurais scaring off spiders off their webs. It was enjoyable to walk along the ridgeback, the trail was very homogenous all day, but it didn’t reduce its beauty. We climbed some rocky stones and behind them the surprisingly amazing summit of Kokuozan was located. At the summit we enjoyed an almost 360 degree view of the two patched villages. Far away in one direction enthroned the inner Japanese mountains and far away merged into a gigantic roof of triangles silhouettes in the blue sky. In the other direction there was the first sign of civilisation, 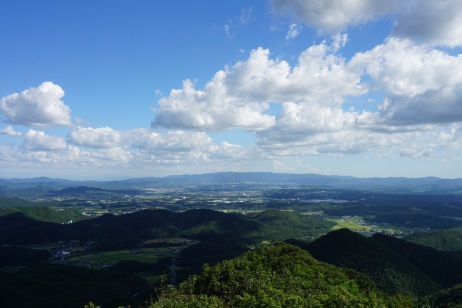 Sanda-Shi, which houses looked like cute toy houses. The fluffy bright white clouds seemed as close as possible to touch them. I don’t know how long we stayed, but all of us deeply enjoyed and I was happy for the opportunity to share this moment with my two wonderful fellows. The sun was warming us up, but spared us with its burning power. I was deeply calm and happy. After a while we continued our hike, the last part. Behind the summit there were some loose rocks, which 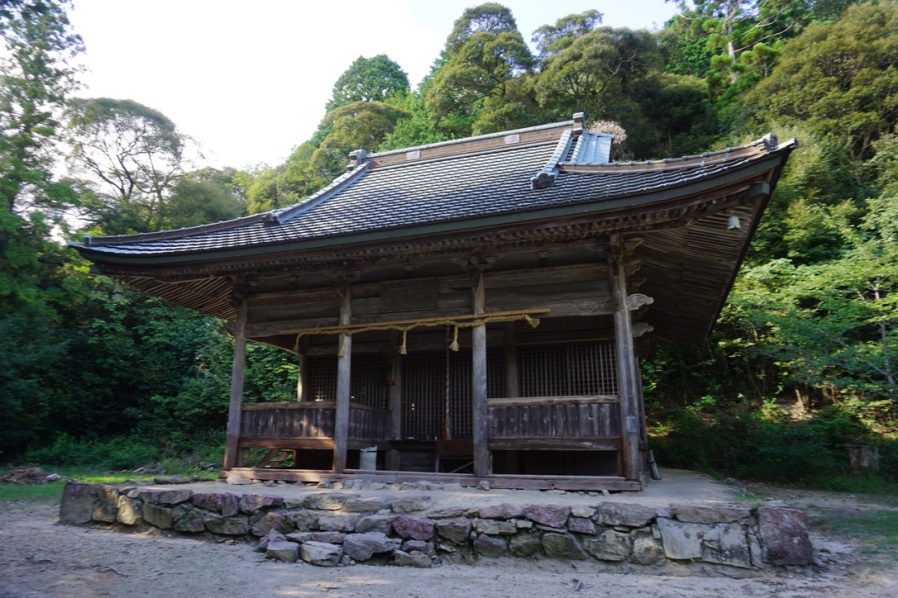 offered an even more amazing scenery. We stayed again for a while until we finally followed the small path back to station. The descent was, for sure, as steep as the ascent. It was a difficult terrain and my tired legs and me were happy when the trail became a path which only went down slightly. Still in the mountains we entered a glade, which harboured an old Temple. This wooden temple was very unique. Usually the huge ones are in a perfect colourful condition. But this one was different, it was very 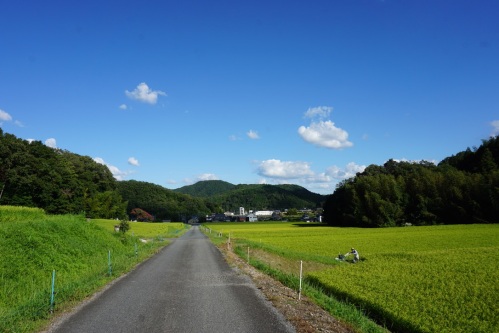 old and charming. We climbed down through a forest and ended up on a paved road guiding through rice fields. Down here the scenery was as beautiful as from the top of the mountains. The colours were incredible, I couldn’t believe my eyes. This is the Japan I deeply fell in love with. We walked through the lonely village and arrived at the train Station which was lonely as well. The loevely summer’s day ended with a cold cup of Mugicha 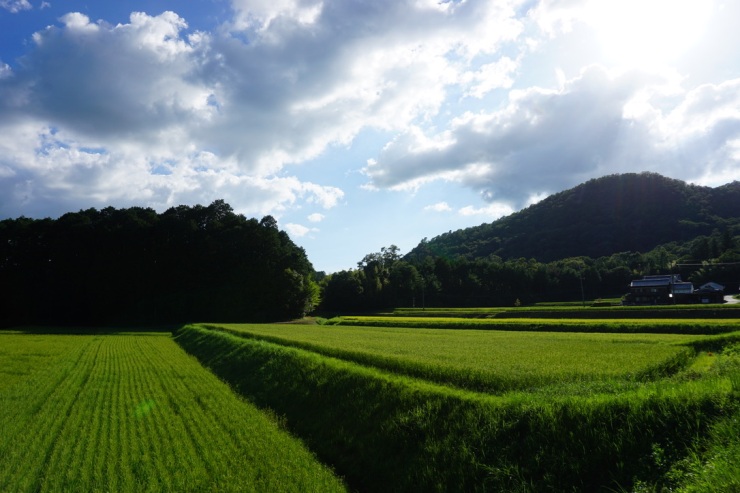 (barley tea). The train took us back out of this isolated paradise of calmness into the never sleeping city which welcoming us and electrifying me again.