Pools and rocks. Today’s trail was a very special one. I heard about it coincidentally a 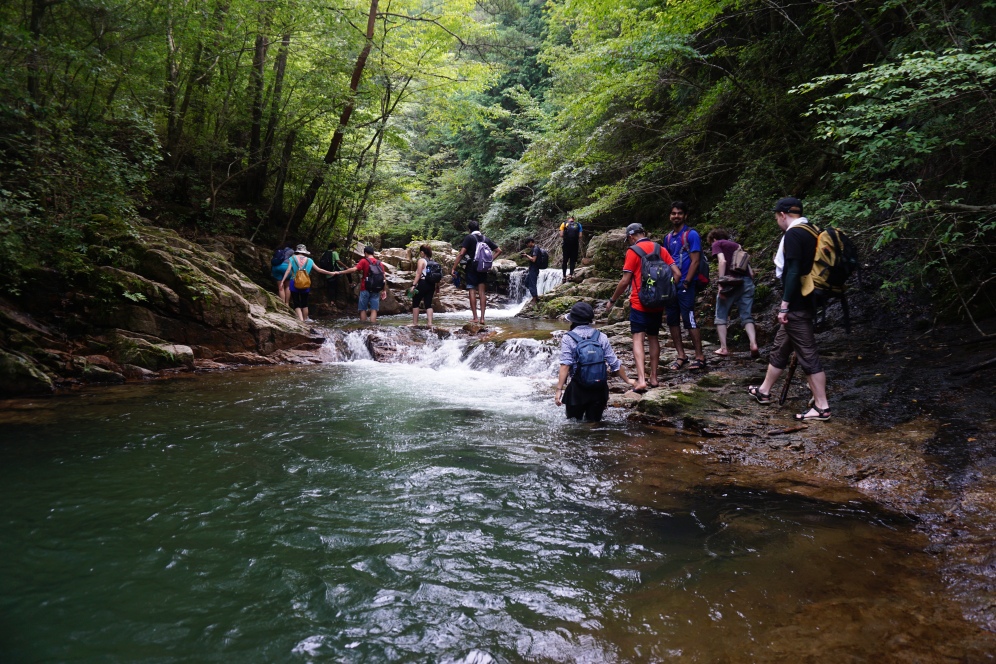 long time ago. I did some research and managed to gather some informations hidden deeply in the Japanese world wide web to create a trail in the end. This trail was known and loved by adventurous locals and while creating it in the coldness of winter I dreamed of summer and this trail. This trail would lead us upstream a running river deep Hyogo’s mountains. It was short, but I was sure it would be challenging. I set the date very carefully while hoping for a hot summer’s day. I announced the event for a long time in advance and 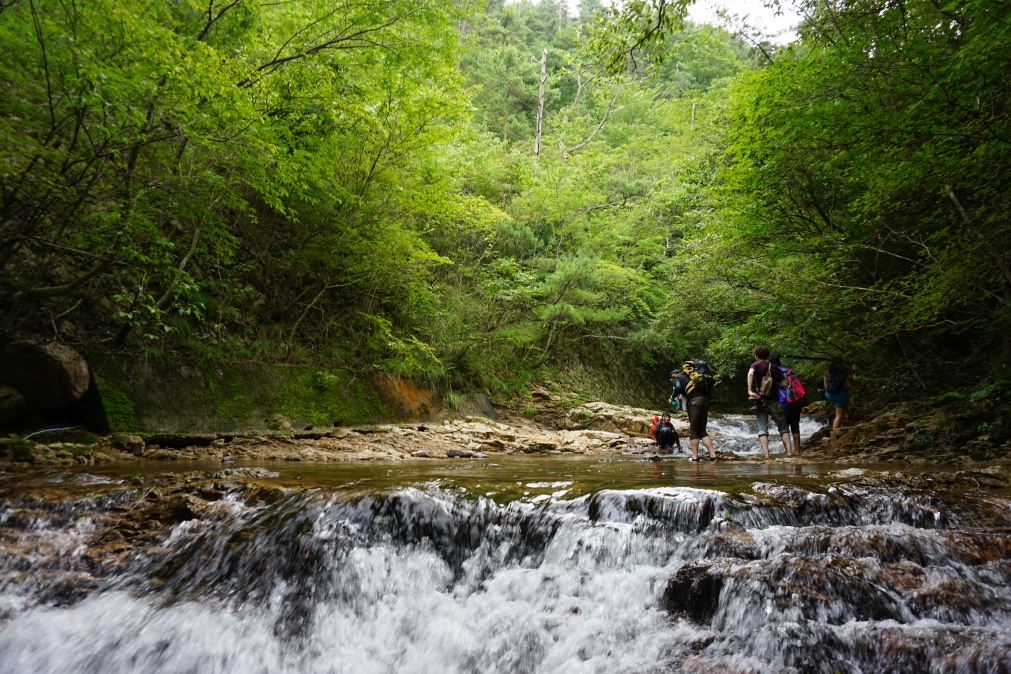 wondered that almost anybody signed up. Only last minute a bunch of people signed up, so we would be the usual group. How wrong I was. In the morning I prepared well and packed all my electronic devices and a second set of clothes into dry bags and lunch boxes (cheapest and safest alternative to keep your stuff dry and swimming). Soon we formed a small group in the train. I didn’t realised when it happened, but at Karatodai Station we suddenly formed a huge group of twenty people or more. What 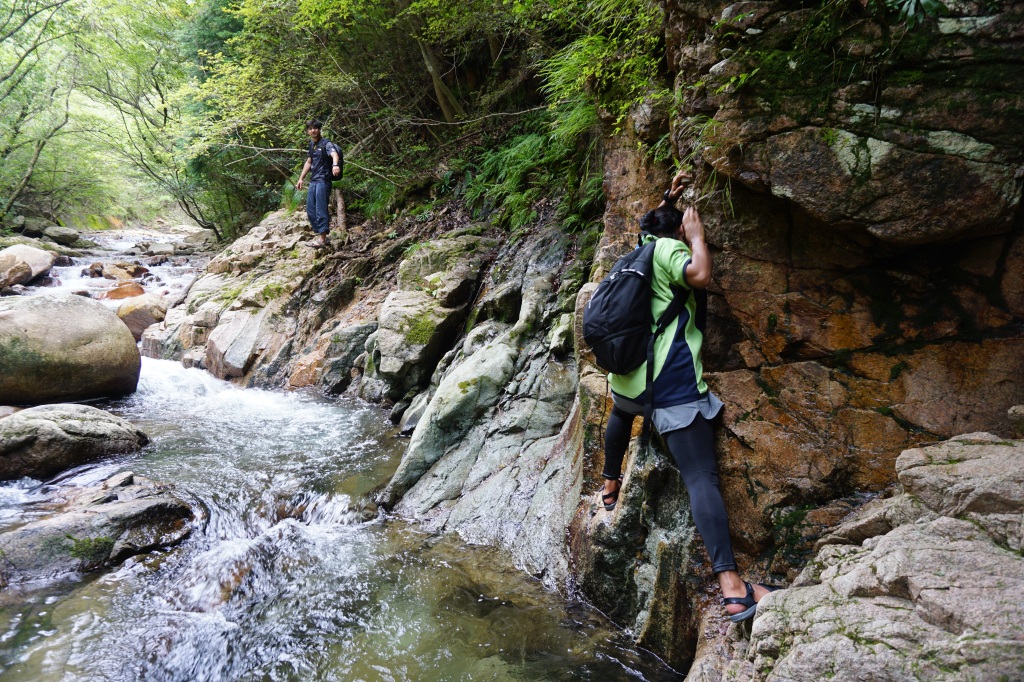 happened was that friends invited their friends and interestingly some of the friend’s friends were friends too, forming cross links all around the group. Once we arrived everybody spread and disappeared into the nearby supermarket and as always they didn’t disappeared at the same time, they did it like in a relay race. It took a while until everybody finally got out of the supermarket and we could start hiking. We started into a sunny day and I was wondering how we could hike 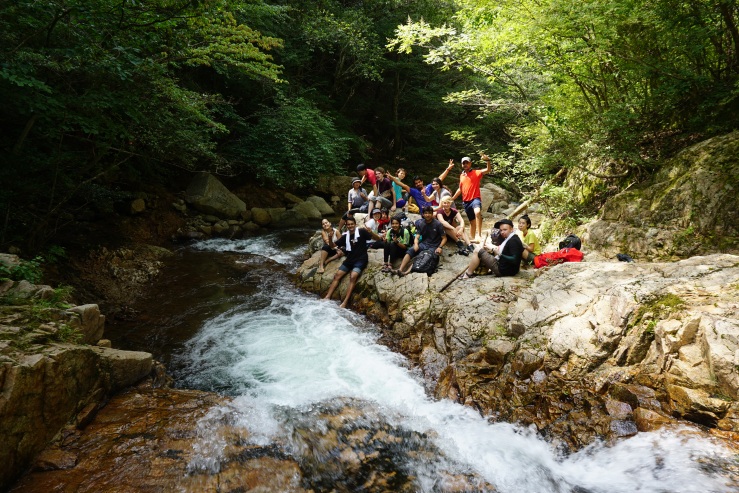 that trail with this huge group. I wondered how many people would remain in the end. But first we had to pass the residential area. People formed small groups and talked and enjoyed their time. Suddenly we arrived the Hozankyo river and people followed the 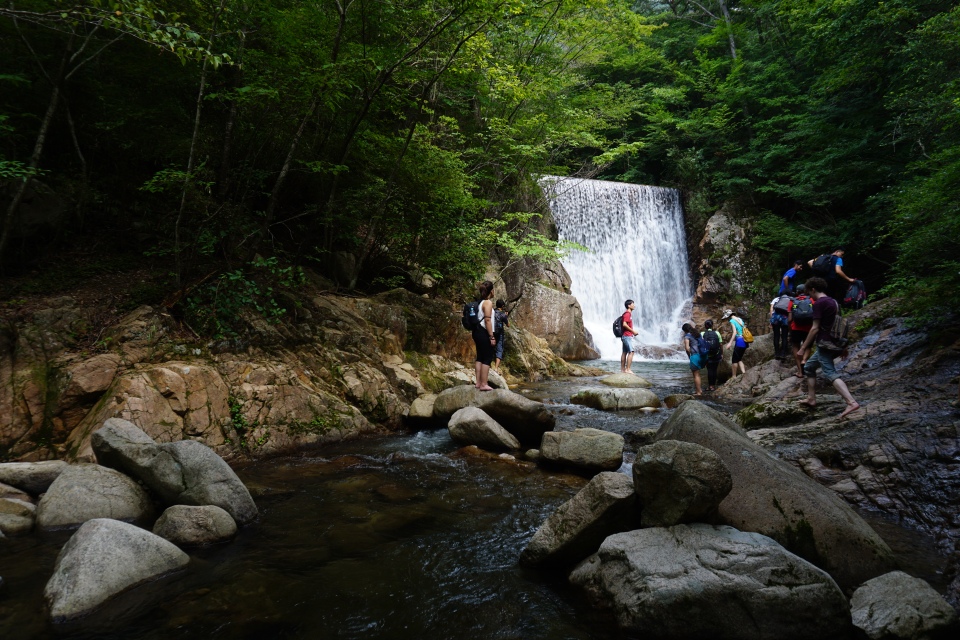 road next to it. At the shore a family had a BBQ. It was time to enter the river and I had doubts. But this was today’s trail, so we climbed down the shore and everybody was preparing to enter the river. I wonder about the family’s thoughts in that moment a large group of foreigner from all over the world coming out of nowhere and entering the small local river. I decided to stay in my hiking shoes, since my sandals lacking grip in the water, but I saw some people wearing flip flops. I entered the water and started hiking into adventure. I waited for this moment all 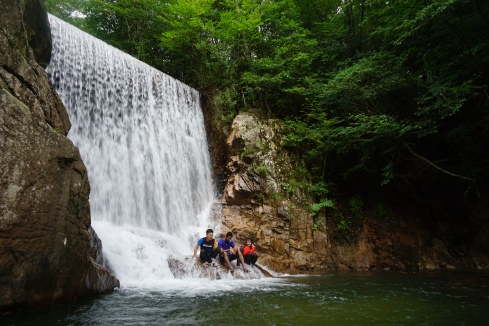 winter. The river was beautiful. Huge rough were laying in the riverbed, forming deep pools, rapids of water and gentle sandbanks. Those who didn’t want to get wet feet now tried to walk at the rocky shore which ended in adventurous bouldering. The group split slightly and I was within the first third. There was a girl, Mari, which was amazingly good prepared waring special non slippery water shoes and even a life jacket. I followed her when she climbed a small water slide. Before that slide there was a pool, which she crossed. The water 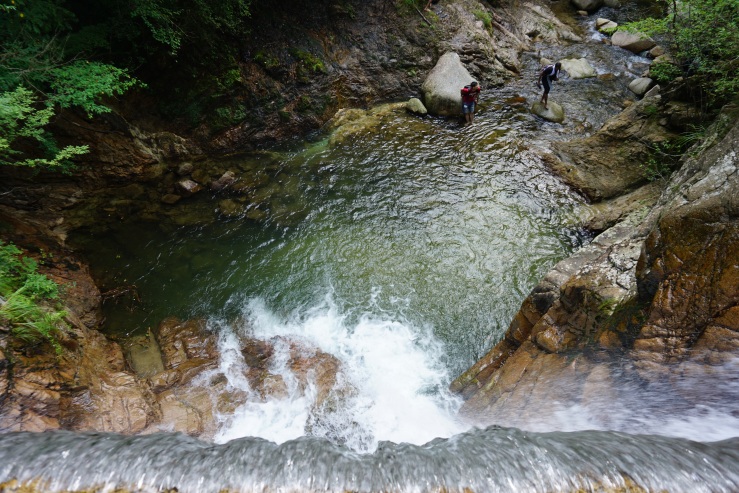 reached until her hips. The cool water entered my pants already seconds after entering the river and my shorts were already soaked. My adult body hosts a child’s mind and this place was a gigantic playground, I couldn’t hold myself back and I didn’t want to. I 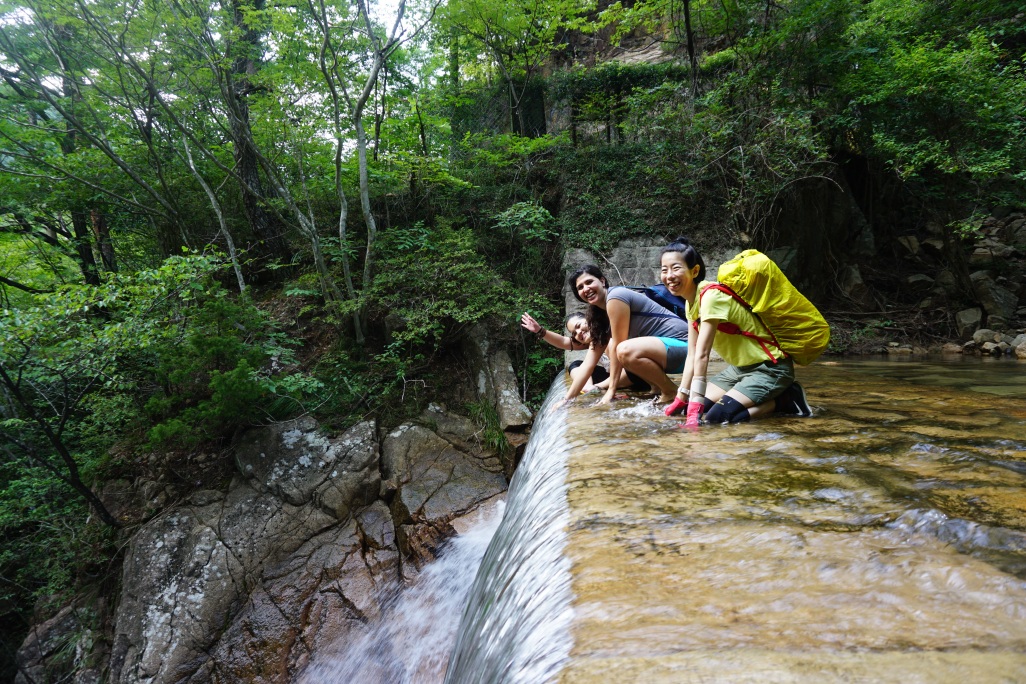 followed Mari and suddenly it happened. I couldn’t see the pool’s ground due to the stream. One step and I dipped into the pool and disappeared. Thanks to Archimedes and my backpack filled with lunchboxes and dry bags it felt
like somebody would grab me and pull me out. It wasn’t dangerous, but wet. Not even ten minutes after entering the river I was completely wet. The party could begin. I was one of the first ones hiking and exploring the river with its amazingly beautiful rocky 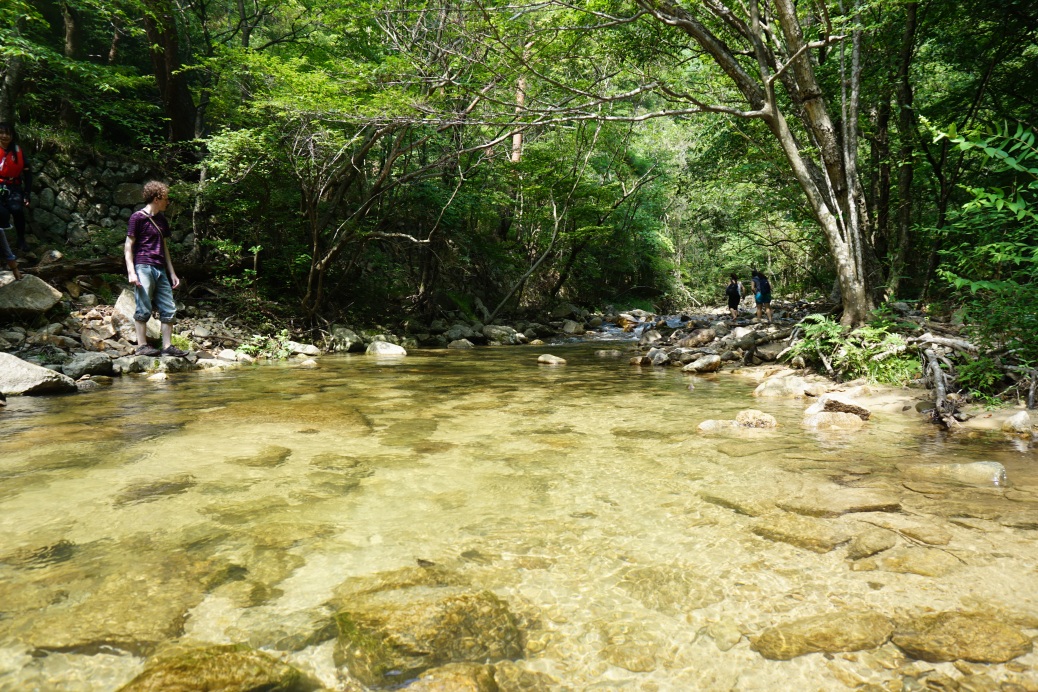 faces and water slides. At a sunny place made of rocks I decided to wait until the whole group gathered again. Something I don’t like about being an organiser is that people start to treat me like a guide. Once I opened my lunchbox to feed the whining child, everybody else did the same. So, early lunch break. To be honest, I felt very cold in my wet clothes and the sun was very welcoming. Soon the rest of the group arrived and sat down and we were completed again. There were so many new and interesting people and I was very keen to talk to them. The terrain was 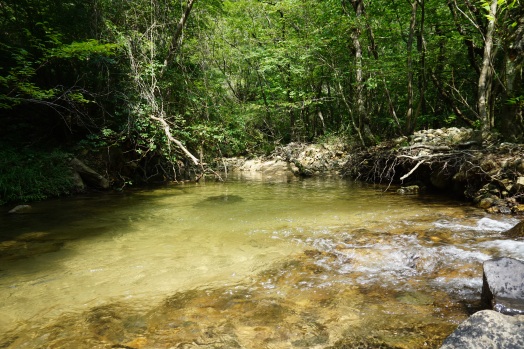 too difficult to talk much, so I took my chance during the lunch break. I was so happy to meet Huyen, who constantly smiled happily at me and made me feel so comfortable. For sure the time was too short to talk a lot. After taking our group picture we continued the trail. I was at the very end using the chance to talk with my friend Yoshi, which I haven’t seen for a long time. I was so glad that she could manage to join this hike and we could spend some time together. We hiked for a while and suddenly we stand in front of a wall. It was a huge waterfall leading into a wonderful big, round 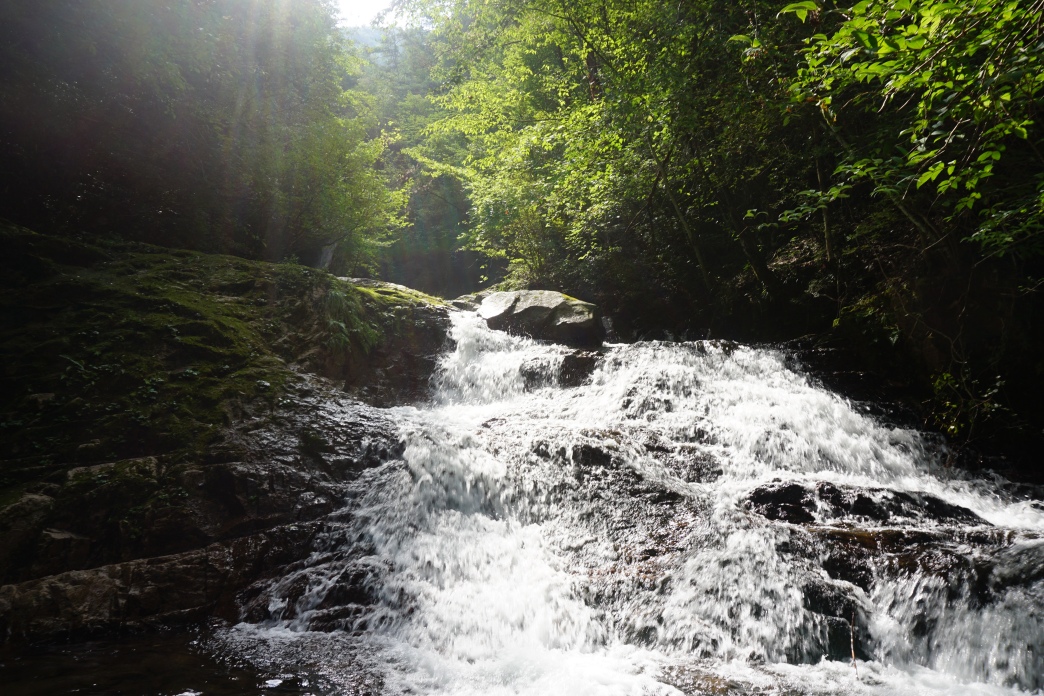 amazing pool. From behind I could see that I wasn’t the only foolish child. The first bunch of people were already in the pool heading for the stones under the waterfall to take a very unique shower. This was a treasures place, that one which is a cover of a magazine you read in office while dreaming out to be there with no idea how this paradise like place is and knowing that you won’t be able to get there. It took only a short time and I joined the pool people taking a very unique bath. It was pure joy, even though the water was colder than I like to admit. Kids like to play and I have no idea how much time we spent there. Another question was how to continue. 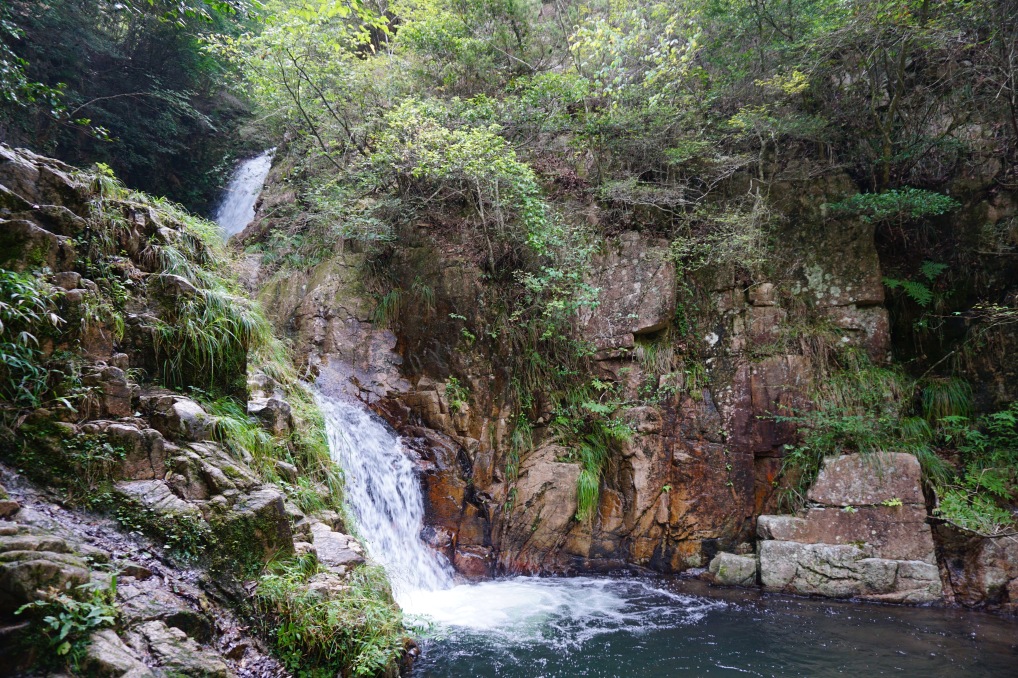 My map said just follow the river upstream while this place was definitely a dead end with no way to climb up that waterfall. Tomal found a small trail like way up the hill on the left side. We entered the road running next to the river shortly and climbed down into the river again. The river face changed drastically. Upon here it was silent and the river was gentle. While down at the waterfall the stream was loud and powerful, I could sit here at the edge of the waterfall with no danger to get washed 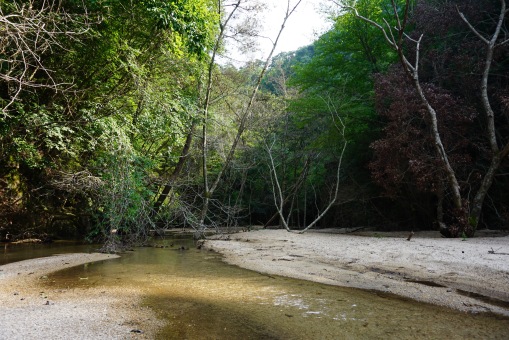 down. The river seemed like a forest patched by sunlight. The rough huge rocks changed to small one and the deep pools and slides disappeared. It took a long time until everybody left the pool and climbed up. Unfortunately in this moment we lost Alex, which sandals fell in the river and disappeared within seconds downstream. He tried to find them and walked down the river hunting for the sandals. The terrain was not easy and I slightly got tired. We arrived at a junction, my map said we need to follow the river on the left, but I was curious what to find at the right. I already gave up to hold 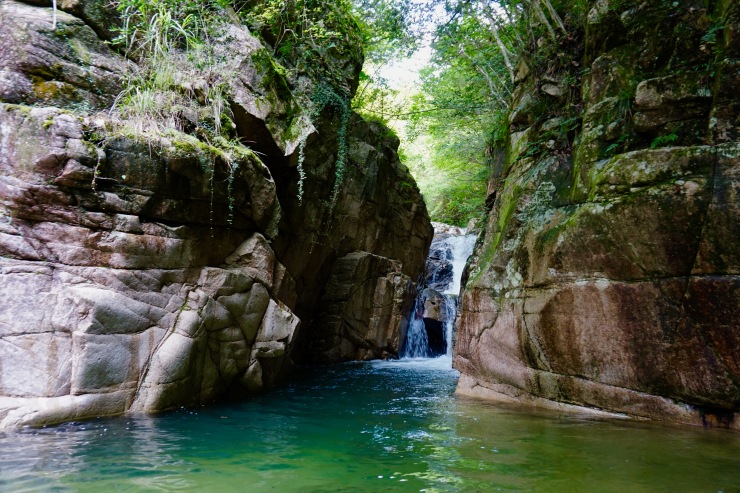 the group together. I went there together with Flo and Tanzin and it was an amazing place with three waterfalls. We could climb up next to it and arrived at an amazing hidden pool. My clothes were just dry until I jumped. But I didn’t regret. The other got curious, too and followed us. The group was spreading again. I followed the junction at 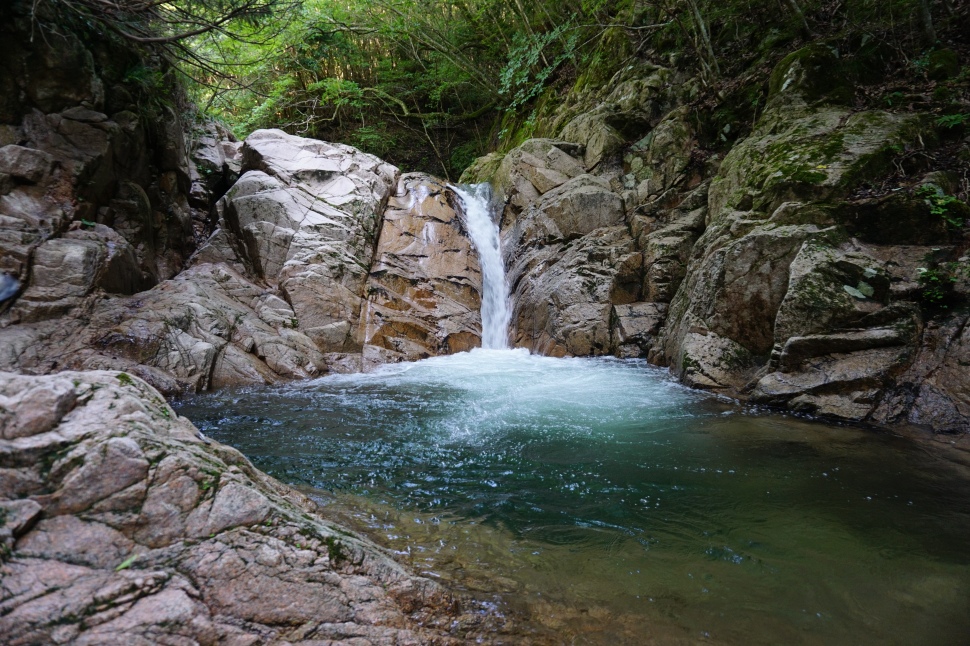 the other side with some people. It lead to another huge, but artificial waterfall, where some of us took a very special photo shooting. I passed by and climbed up the shore at the left side. Again the river’s face changed drastically upon the waterfall. It was difficult to enter the river again, but the manmade dam was a safe option. The river over here was a calm and wonderful sandbank with a magical atmosphere. Half of the group were gone, some were still taking pictures while others remained somewhere else. I was sure I was the only one 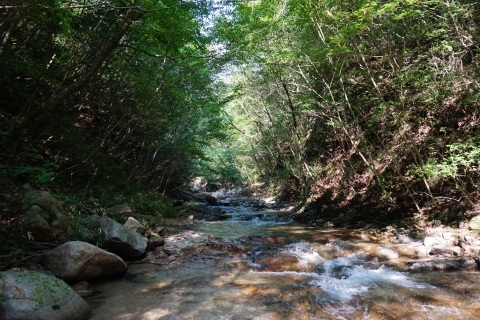 who downloaded the trail, but I couldn’t do anything right now. We continued and walked on the ground of a canyon which was leading into a turqoise pool. The scenery was incredibly. I couldn’t believe my eyes. There was a narrow canyon with a waterslide. We had to go up. No chance. For me as a rock climber I would have been able to do it with special equipment, but it wasn’t possible for hikers. We found a small trail on the left guiding to the street again. And another one going down to the river again. In this moment we lost the group. I was just 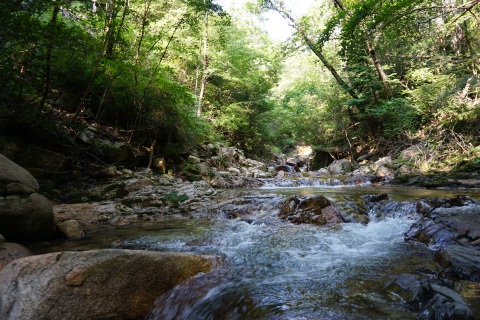 above the slide which formed the dead end with Tomal, Tanzin and another guy. The others didn’t
show up. This pool was the most amazing one. I was deeply amazed by this river and its trail. We had to climb up some washed out rocks and entered the calm river again. It was pure beauty. I was tired, but I also didn’t want to stop. We ended up in another dead end formed by an amazing waterfall and climbed up a trail at the shore. We crossed a bridge and followed the road. This was the end of the Hozankyo river trail. I sent a message to the group. The big part 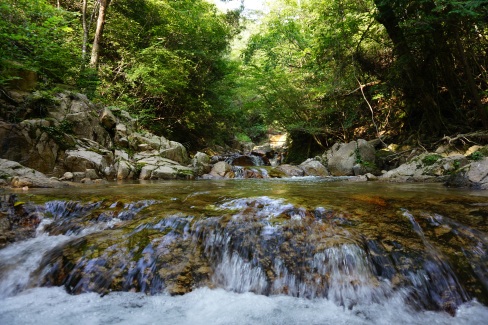 of them were hiking on the road upstream deeper into the Rokko mountains. We were just behind and easily caught up. Armed with their smartphones they were heading into the mountains heading for a train Station. Indeed nobody downloaded the trail. We followed the road for a few meters since my map said there would be kind of a campsite and I wanted to check it out for further events. It was a small meadow next to the river. A nice, but not amazing place. We walked back to Karatodai Station on the road which was running next to the river. It was a short walk and soon we arrived the place where we entered the river at the very beginning. Back through the residential area we arrived the Station at sunset. I 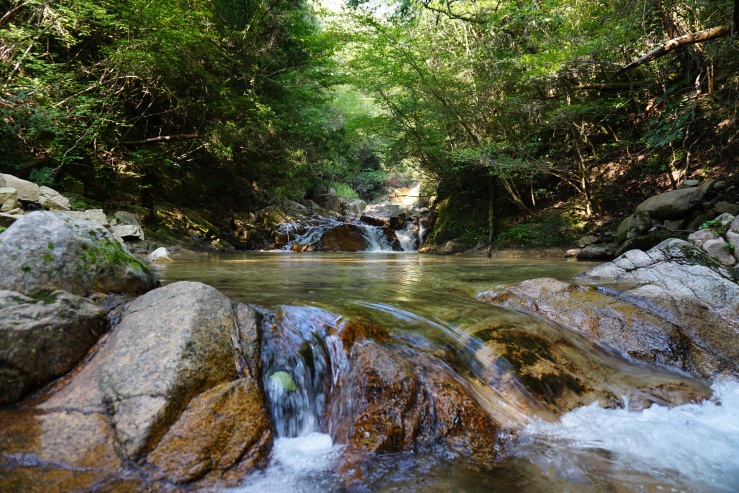 was happy to finally change my wet clothes and get rid of the tons of sand I was carrying in my shoes. Together we were going to Abi’s place to have dinner at an Indian restaurant. Having cheese nan and butter chicken curry in the end of this day was heavenly. With a painfully full tummy I went home and fell into my bed. Unable to move, but happy.