Kongosan again. We already climbed Mt. Kongō this in winter and coincidentally ended

up on an adventurous trail, which is only known by some locals. From the very beginning I was that amazed by the trail that I decided to come back in summer some day. By now it’s summer and the time to keep my promise has come. Japan is unbelievable green in summer due to the lot of rain and sun and I was keen to see how the winter wonderland turned into a green paradise. I expected many people joining, since in winter it was the event with the

highest number of participants. The more I wondered that hardly anybody singned up. The people who signed up, where not coming without any notice (travellers), so together with the usual people I started in this week’s adventure. I enjoyed that we were just a small group of friends since last time we were so many people and it was hard work for me to manage the group especially because some people might misunderstood that I’m not a guide. We met at Shin-Imamiya Station, the area where I used to live before I moved last month. I was happy to be around again. One after one joined at the meeting point and soon the group of four of us were complete. Last time there was a long queue at the counter for purchasing the Nankai Kongōsan Special discount ticket (1590 Y) and we almost missed the train. This time it was really relaxed. We immediately started talking a lot and as always we almost missed the station to drop off and as always Sayaka saved us in the last second. At

Kawachinagano we expected Flo to join us, who announced that he might be late and going to rush to the bus. Together we lost the feeling of time and got it back while coincidentally watching how Flo was missing the bus we all were supposed to take. Anyway we were altogether and just waited for the next one on this wonderful sunny day. Once in the bus we enjoyed the ride into the mountains while chatting. We were almost alone in that bus and I wondered a lot. In winter the same bus was full of hikers and we 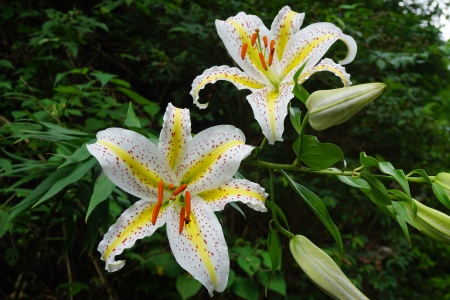 had trouble to squeeze in. Since three of us knew the trail, it was a super relaxing atmosphere for me and I think the first time I didn’t have to tell my story on the hike. The trailhead is hidden and after the entrance was small forest road, which was overgrown now in summer. The trail became clear soon. We passed the waterfall and the first adventurous climbing passages. We climbed up a waterfall and missed the trail for a moment. The way we choose guided us steep into the mountains into a dead end and climbing down scared me a lot. It was the first time this summer that wearing my

sandals was risky and I changed to shoes after cleaning in the river all the dirt I collected
at the short, but hard descent. The water was crystal clear and cold. The perfect

refreshment in a hot summer’s day. We continued on a small forest path and enjoyed the scenery along the river. The trail became very narrow and the river next to it a canyon. This part was rather bouldering than hiking, but luckily it was supported by some ropes. Last time a girl struggled here  and almost fell into the canyon. So, I was even more happy to have no tourist around me this time. The next part of the trail was in a bad condition, the trail was narrow, the soil was super soft due to the rain in the last days and on one side the 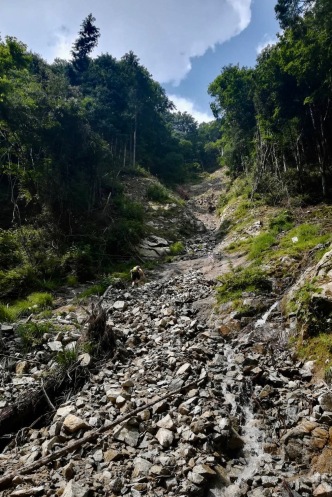 steep canyon while the trail itself was overgrown by ground plants and hiding itself and venomous snakes. No questions it was challenging. At the end of this part we entered the forest again and made our lunch break at a glade next to the river. Even though it was nearly peak of summer season the was as cold as I couldn’t soak my feet in for more than five minutes. We enjoyed the lunch break and the opportunity to escaped the cities’s heat and being at this refreshing place instead. We continued and soon we left the forest trail to climb into the growing riverbed. Hiking in the riverbed some climbing, but was amazing beautiful. The charming river changed from a frozen field of ice crystals in winter to a sparkling and joyful personality in summer. We entered a huge slope, which might was caused by a landslides years ago and the the roof of trees opened. Immediately we could feel the powerful sun enlighten us and heating up our skin. We left the river’s slope and entered 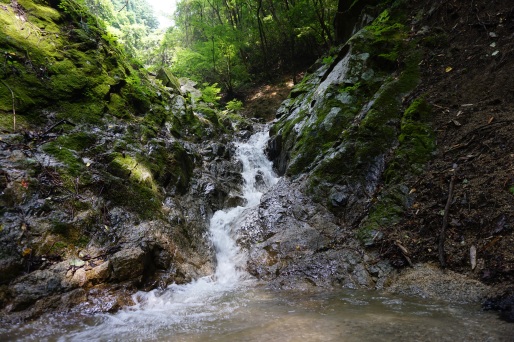 the shady forest again. We climbed a smaller riverbed, which was more steep and the sweat run out. The very last part was a mixture of hiking and climbing and demanded
our last energy until we merged into the last stairs of the tourist’s path. We arrived at summit and I wondered again. In winter this was a crowded winter wonderland while now in summer only a few hikers enjoyed the feeling of finishing that

climb. We walked to the summit’s viewpoint and took a break there. We enjoyed being there a lot and did a lot of

nonsense. Here at 1125 m we were literally in the clouds and the amazing
view into the valley I was hunting for was hidden. Only clouds as far as the eye could see. We spent a lot of time at the summit and since I didn’t set the trail back beforehand, I spontaneously chose one along another river. At this point I have to say that I have a special talent to pick the most adventurous trail even among tourist’s trails and even though I’m not searching for it. The trail was on the official map, so I thought it will

be easy (the same as last time when I created the winter’s ascent online).
How wrong I was. We started descending on a well established trail, but took a diversion which guided us to a very old abandoned graveyard within the mountain’s forest. A mystical place. A small trail was hidden in the bushes and of course it was the one I chose ten minutes ago. We had to climb down steep steps of roots and loose soil and

within the deep trees it was super dark. The clouds around us turned dark and not too far away we heard the thunder rumble. We entered a riverbed, which was narrow and surrounded by steep mountains and high and deep trees. I started to regret my decision, but as always within a few minutes we climbed down too much to turn around. I hoped this wouldn’t be a dead end and we wouldn’t have to go cross country in the end. Something which could turn out extremely dangerous at this time. I found single 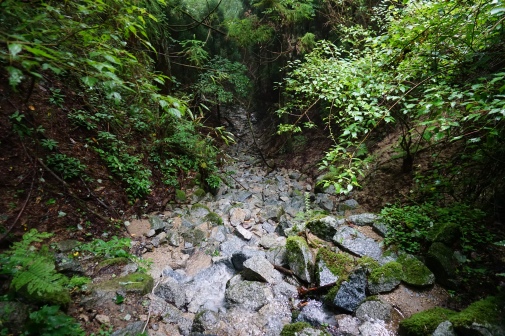 footprints in the sands of the riverbed. They must be fresh from today and were both directions. Also some supporting ropes were installed. At least this was a trail indeed at some time. I let my worries fly away and slowly started enjoying. I like imperfect conditions and I love rain and “bad” weather. It was dark and the thunder was grumbling. It was far away and no need to worry. The sun was also far away and the temperature enjoyable. Somehow I felt as safe and as relaxed as while lying in my tent. I 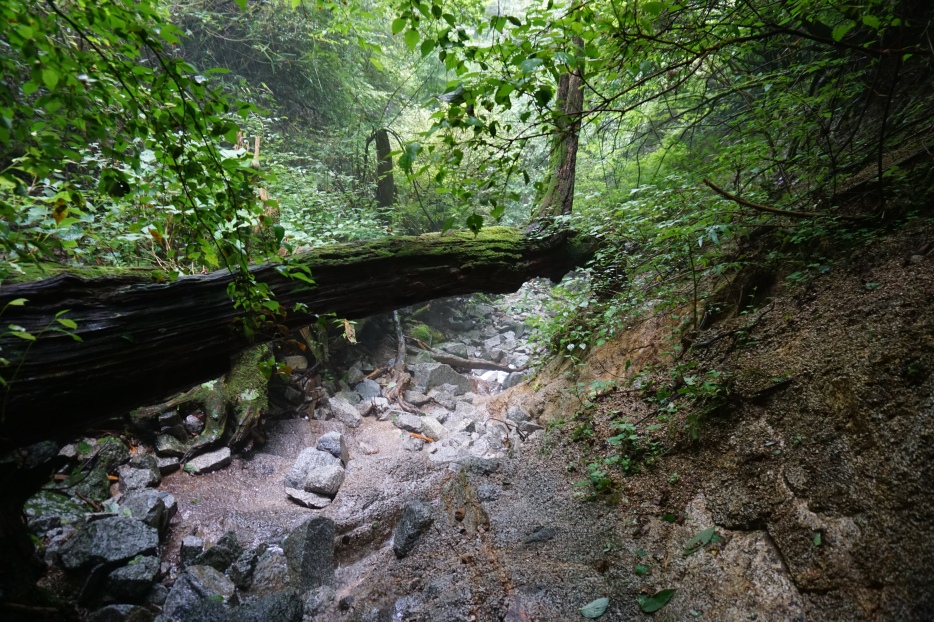 felt deeply comfortable. The terrain was challenging and it took a lot of energy to set every single step properly. At some point I didn’t care anymore about dry feet and steps into the ankle deep water. After some disgusting moments I enjoyed the refreshment at my feet and felt like a tree soaking the refreshment from my toes to feet to my brain and mind. Halfway the trail merged with other ones (which went up), which relieved me. It became more and more a clear and

tidy hiking trail and soon we left the riverbed and hiked on a small forest trail next to it. The terrain remained ambitious, but amazing at the same time. The river became a steep slide with breathtaking waterfalls and the trail more and more a treasure. We hit the riverbed several more times and I enjoyed soaking my feet like a child in a puddle. Finally this was an official trail and we even met two other hikers. Good for us, since now it was impossible to turn around. The river 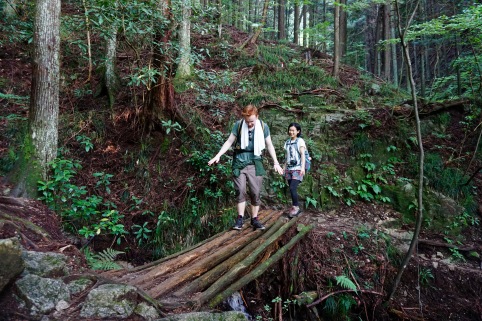 became very calm at the end, but showed us its amazingly beautiful face until the very end. For me it felt like entering another world. A magical one. We ended up on a small street which was leading us back to the bus station. On the way there was an atelier where an elderly Japanese man created and sold colourful hand made outdoor equipment. It was amazing and I totally recommend to go there and visit him. You’ll definitely find something useful and unique

gear made by a very lovely local craftsman. The bus station was close and we took the very last bus. I have no idea why it took so much time in the end, but it was worth every step on this treasurous trail.

There is a special Kongōsan discount ticket offered by Nankai, which is 1590 ¥ (from Shin-Imamiya Station) and includes the return train and bus ride. You’ll also get a 20 % discount by using the cable car. Read more about the ticket here (Japanese only).

*I strongly recommend this trail only to experienced hikers. Surefootedness and endurance are required. The trail is prone to landslides and the condition can change any time.