Climbing. I was very excited about today’s trail. When we climbed Mt. Rokko last winter 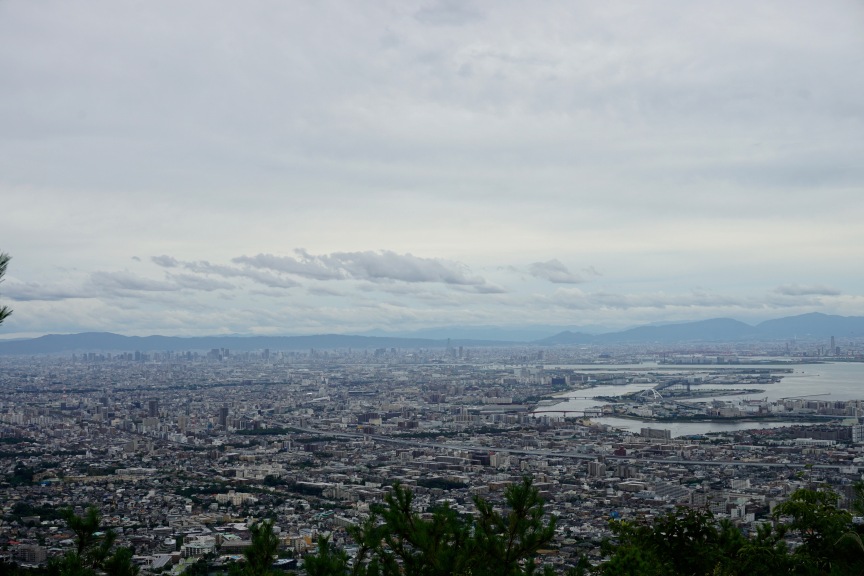 we passed a passage of rough bright yellow rocks and it was rather rock climbing than hiking. The view we had of Kobe, Ōsaka and the Ocean was breathtaking. This part was Mt. Rokko’s Rock Garden and my expectations were high. By now, we already hiked a lot of different areas all around Ōsaka and the this is with no doubt one of my favourite area. The area, especially Mt. Rokko is a popular destination, so I wasn’t surprised that more than fifteen people signed up for today’s hike. When I arrived at the 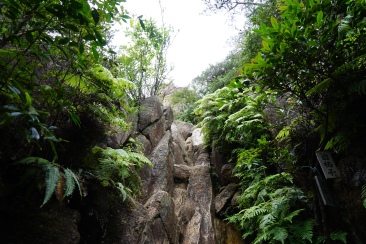 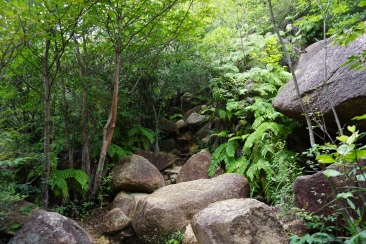 meeting point at Ōsaka Station, the group was almost completed and we took the train to Ashiyagawa Station, where we met Tomal and some other people. It took a while until 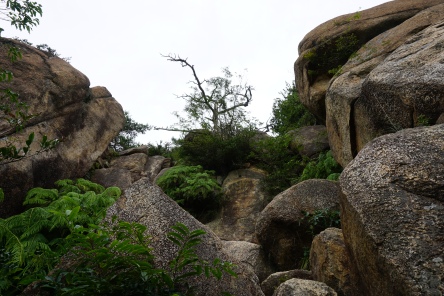 we were complete and ready, but soon we starting in the sunny trail. We passed a short residential area and entered a forest’s path. Smoothly it went up and due to the humidity it was exhausting and we sweated a lot. It is a very strange feeling, even though it wasn’t that warm and the sun’s power was weakened by some clouds and the trees I sweated way more than usual. It felt like my skin couldn’t hold the water. Luckily we could enjoy the first amazing views of Kobe and the Ocean while recovering. We 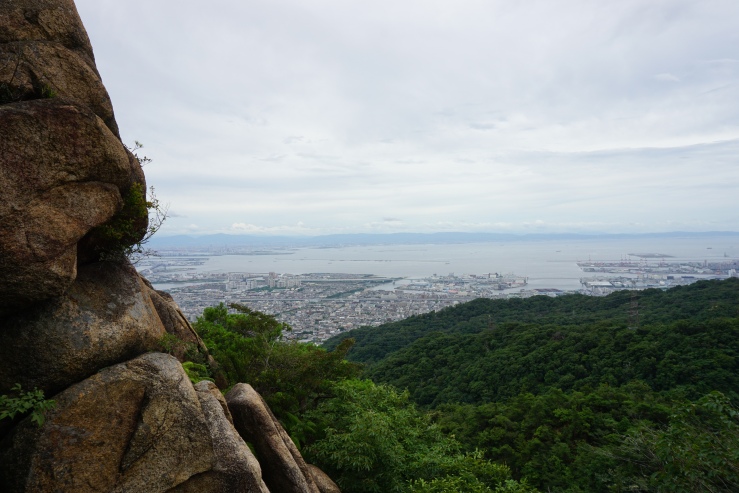 continued climbing up and suddenly I saw some rough chunky rocks on the other side. I got excited and hoped that would be the trail I chose. They did. The trail went more and 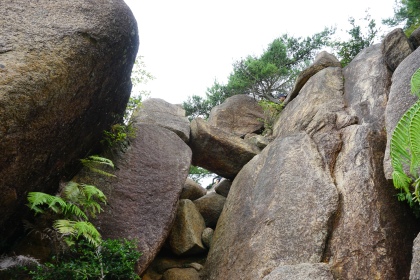 more rocky and soon it became just a wall of big yellow chunky rocks. It felt like rock climbing and the view was amazingly breathtaking. Some were as amazed as me while others were contesting a challenge. With outstanding success. While climbing through the big rocks of the rock garden we got separated a bit, but on a pleatau we merged together. I couldn’t believe how amazing this trail was and happy that the weather was supporting us. We enjoyed for a while the views while gathering while Juzer and me bouldered to 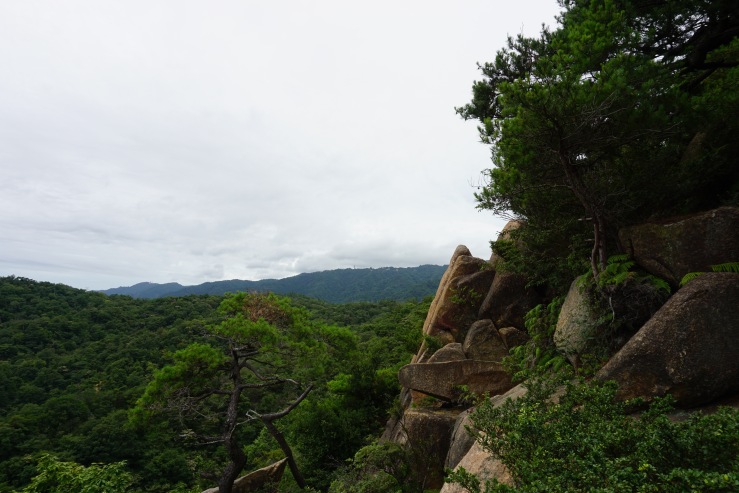 another rock face next to the plateau. Mainly due to childly exuberance. Even though I do rock climbing and bouldering I could feel the fear while bouldering there in my 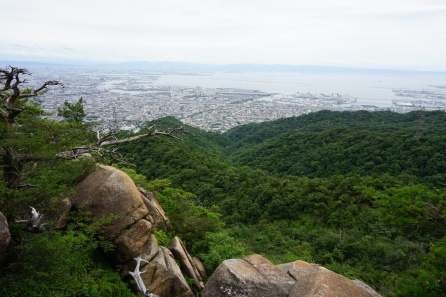 minimal sandals and saw the stupidity of this action clearly. Luckily it went well and altogether we continued our way through rock garden. It was already lunch time and the spot I had in mind while creating the trail just showed up when my stomach growled. The place was a natural square plateau with a breathtaking view. The plateau is the plane surface of a big rock and it is absolutely surreal how it got there. But it was an amazing place and I dare to say that’s the most amazing place I enjoyed on all 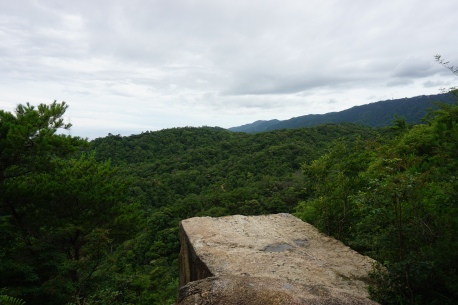 the trail around Ōsaka. Everybody was happy and enjoyed this wonderful lunch. We met two very sympathetic locals, took pictures with them and talked a lot. Suddenly we realised we lost two of our fellows, I sent our location and hoped they would manage to find us. Strengthened we continued the last meters of climbing to reach Arachiyama summit. A second amazing viewpoint followed where a very special local enjoyed. A ginger cat sat like the Lion King on a rock reaching in the 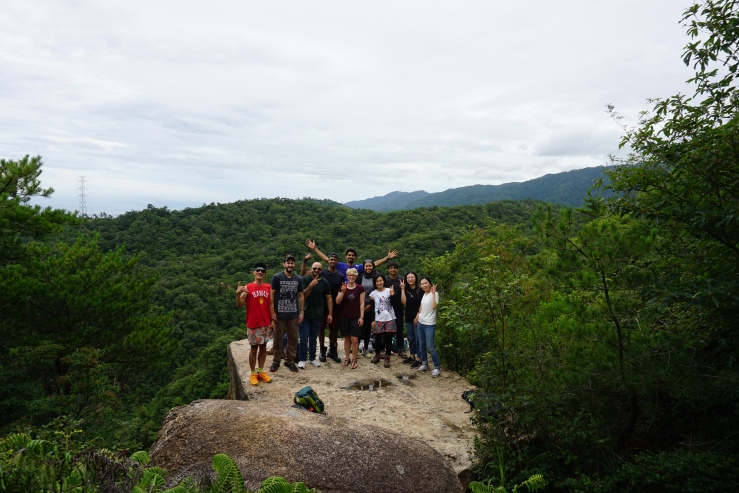 air. The cat was deeply relaxed and the coolest sock on that rocks. Juzer and me were the last ones and a little bit left behind. The others waited after climbing  the last rock chunk. 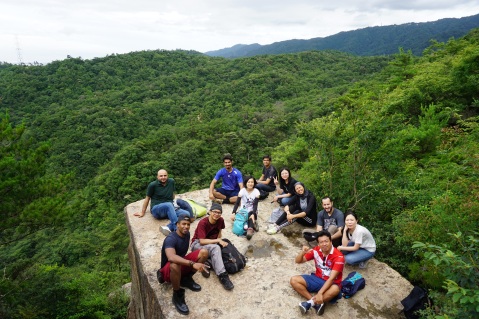 I usually hike in barefoot sandals and it was the first time I got a problem. I couldn’t find a hold at the plane wall of rock and also not bring enough pressure on my shoes sole to climb it up. Juzer supported me and created and and artificial tread. Like a stranded whale I heaved my body up that rock while struggling a lot. A bitter moment for a rock climber. The trail guided us on a forest path deeper into the mountains and minutes later we arrived the summit of 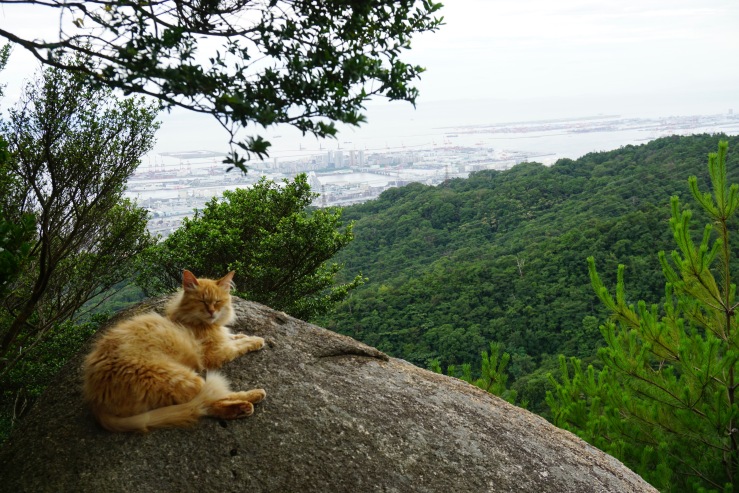 Arechiyama. Since the summit itself is surrounded by trees it wasn’t any special place, but we met our two lost sheeps and were complete again. Laughing and chatting we continued on the trail which was consisting of yellow rocks and a lot of green fern. It was 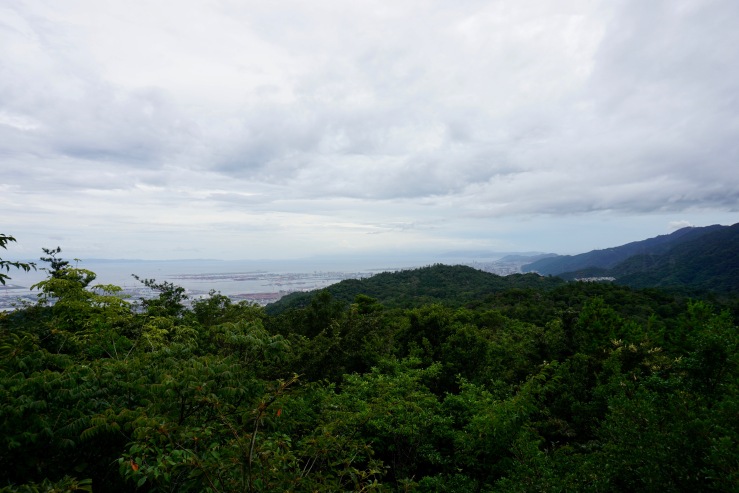 very enjoyable. The trail changed its face many times, so it din’t get bored. I was super thirsty and I my body craved for a cold drink and suddenly there was a fountain on the 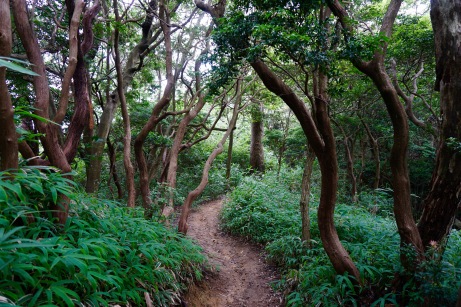 trail wish fresh cold water from the mountains surrounded by some self made benches to take a rest. We filled up our water reservoirs and started refreshed into the last part of today’s trail. The last part was again very beautiful and a some water rinsed along the trail. For my feet the pure refreshment. Then we entered a deep forest and it felt like being in a fairy tale. We followed a river which became slowly bigger. Now 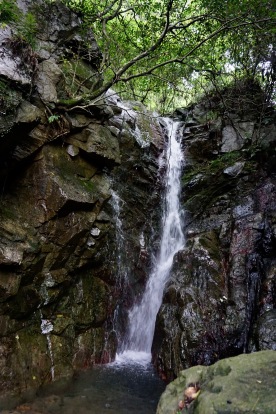 and then there were some self made benches inviting us to take a short rest. The forest became darker and deeper and the river a canyon. There was a huge waterfall next to ruined house or temple. It was a scaring place. Dark and lost. I climbed to the waterfall and then. A load scream. It was me. The body of a dead baby boar was lying in the pool. Half eaten. What a creepy place, the perfect scenery for a horror movie. I didn’t feel convenient. It was only a few hundred meters along the impressive canyon until we got out of the forest and entered a residential area while the daylight was drizzling. We walked to Okamoto Station, which was just a few hundred meters. This was one of the most amazing trails I hiked so far and I absolutely recommend it. It is way more amazing than climb Mt. Rokko itself. No doubt, Mt. Rokko’s Rock Garden is one of Kansai’s hidden treasures.