Wild river. I love the the mountains of Takarazuka. It’s the place of my very first hike I organized in December and since I also spend a lot of time there for rock climbing as

well it became like my second home, especially the area around Dōjō Station. This week the temperature hopped suddenly and until Friday nobody signed up. In the end a few people signed up, but I was very suspicious whether they would show up or I’ll be on my own. I changed the last meeting last minute to the platform instead of the main entrance and bit by bit people turned up until we were a group of five. Also familiar faces appeared, like Gabriel who joined us already two weeks ago. I was very happy when Sayaka showed up, even

though she is a sign of falling into adventure. At Dōjō Station another girl from Takarazuka joined and together we started into a sunny day. The area around Dōjō Station is just amazingly beautiful and even our way through the rice fields in the residential area was enjoyable. For me it presents the imagination and the real Japan and the same time. While walking through the rice fields it is very hard to believe that the big city of Osaka is just a bit more than a half hour ride away. We entered a manmade forest road and had to cross the highway. 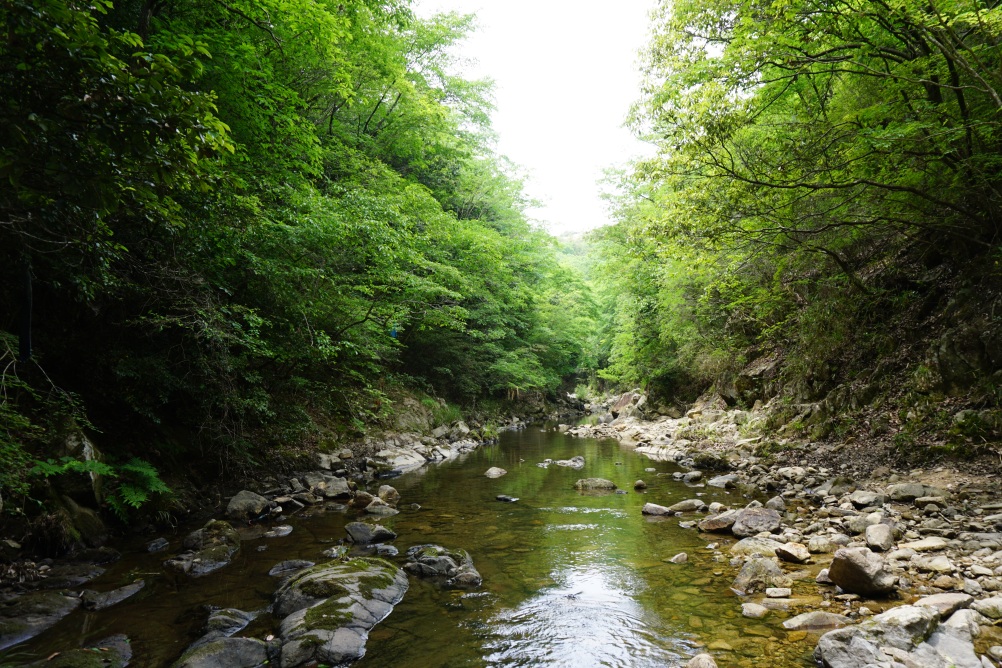 And again we saw a snake! which was kind of trapped in a water gutter. It was able to get off and we continued our way. We followed the trail and the forest road became a trail. We already hiked for a while and I felt a little bit disappointed. This trail’s source was again Mat’s hiking book and this my favourite area, but the trail wasn’t special. A little bit later the trail merged into a riverbed, the place where according to osm data no trail exists and I worried about it. But luckily the trail continued next and into the riverbed

and became more and more beautiful. The river was embedded into a valley surrounded by deep green mountains which created an incredibly beautiful contrast to today’s blue sky. I was wearing my barefoot sandals again and not even a minute later I walked in the shallow water of the river and enjoyed the refreshment. Less than five minutes later a little let’s call it ancient appeared and I was standing in the water until my hips and continued with wet trousers. Actually I forget too many times that I’m a

grown up and enjoyed it a lot. It might was even intention… Soon we took our break in the riverbed and our feet enjoyed the cool sparkling water. The break was very refreshing and motivated we continued our way along the river, across the river and sometimes into the river. Since the riverbed was a very rocky place, the trail included a lot of climbing next to it. Many ropes were provided  and so it became a challenge with a lot of fun while mastering it. I mostly walked into the river. It was a lot of climbing and we were very slowly, but this scenery was also too beautiful to walk fast through it. The

trail surprised me a lot and it was the perfect season for hiking it. Finally we entered the forest and ended up back in civilisation. We finished today’s highlight. I thought. We passed a kind of rock climbing school and continued on a road. The trail guided us again

onto stairs up to the highway where we entered a rocky trail into the mountains. This kind of trail was that one which amazed me last time so much, that I was keen to hike this area again. The small path was made of yellow sandy stones and reminded me of my way through Spain. While down at the river it was cool and shady, it changed a lot while entering the path into the mountains. The heat was surrounding us and we could feel it on our skin. It was not moving. A very special smell of dry woods was in the air. A smell I really love. We had to climb up and the mountains around us showed their face. Amazing. We 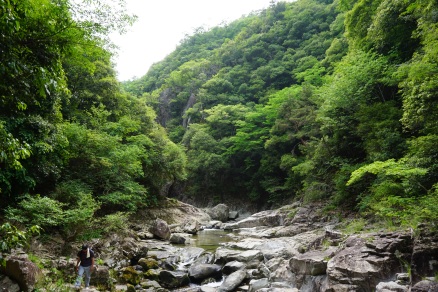 could see the huge face of a wall which was almost vertical. We climbed up onto a summit next to and enjoyed an amazing view of this so called “hundred rock”. Someone had made a small camp up there with even a very lovely garden and gardening stuff. We enjoyed the amazing view for a while until we continued. The trail was still beautiful. At a junction we went to the left and a sign confirmed the trail on my map. No-one of us remembered where it happened, but somehow we ended up on the

wrong trail even though there was no junction and the trail we walked on was well developed. But at this time we din’t realise. We had to cross the highway again and were happy about the stairs which seemed made for the hikers. We passed a tunnel and went 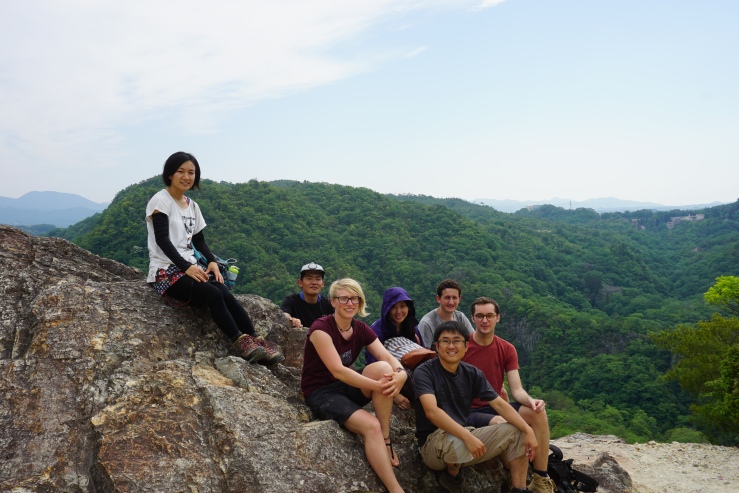 up again on the other side and suddenly the so well developed trail ended. We walked along a fence next to the highway until we arrived a small plateau. A dead end. The sun was heating up our heads without mercy and all of us were tired. There was no way

down. It seems to be like the destiny of this event that at least one time we end up like climbing cross country like monkeys. It was steep and due to many fallen leaves very slippery as well. But we had no choice. According to the map we would hit the original trail (a road) in less than 100 m, so going back without knowing where and if there was the junction was no option. Slowly we climbed down and up again. Luckily we could continue directly next to the fence, which made the descent way safer. Happily all of us arrived the road safely and we could continue our way back to station. We ended up again in the rice fields and enjoyed the last steps to the station. This trail surprised me a lot and except of the cross country part I can absolutely recommend this trail. It is definitely one of Kansai’s hidden treasures and way more amazing than the famous trails at Mt. Kongo or Arashiyama. We arrived the station very exhausted and refreshed ourself at the little shop next to it with Ice cream and coke until we took the train back to Umeda, where some of us went to an Udon (noodle) shop to enjoy dinner together.