Breaking all the rules. This weekend was peak of Sakura and I was thinking about

today’s trail a lot. I still couldn’t find a perfect spot and was tired about crowds, so I decided to go Kyoto again, but this time into the very mountains. My very first hike in Japan, I did in autumn when I was in Kyoto and it was one of the most beautiful ones. I was keen to hike it again in a different season. It was also a backup hike, if I’m running out of ideas. I extended the trail along Katsura river, so we would end up in Arashiyama and being still able to enjoy Sakura there in the
afternoon. So was the plan. I published the event very late, so as expected there were not many participants. In the morning I missed the train and skipped the meeting point. I just arrived in the train, where Sayaka was awaiting me. We met the others at Saiin

station in Kyoto. Since Tomal was late, we took one bus later and had enough time to chat and relax. We started hiking in sunshine with blue and surrounded by mountains. Today was supposed to be an easy very enjoyable hike along and inside the river. The trail is very beautiful and definitely one of Kansai’s hidden treasures. I already wondered that there were no hikes during Momiji (autumn) and this time we were alone again. The trail guided us to a temple and continued along the river, which was within the greenish mountains spotted by white and violet Sakura flowers. I could feel my body calming down and enjoyed the trail, river, mountains and the people around me. The temperature was perfect today, warm, but not hot. So I’m used to walk barefoot and started season and took my shoes off. It is 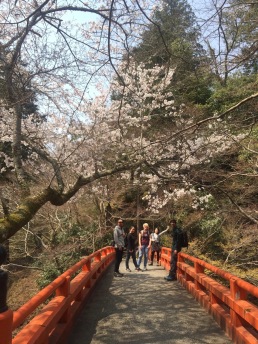 such a different and intense feeling to hike barefoot. At the beginning of the season it is very hard and only possible for a few kilometres, but I enjoyed every step. We had a lunch break at the place I had last time. A nice place in the river bank beside clear turquoise shining water pools. After a refreshing picnic we continued along the beautiful river. And than it happened. A scream resounded through the mountains. It was mine. There was a long ugly snake directly on the way. The snake slowly disappeared, but the shiver it left stayed. Don’t forget I’m coming from a country without any dangerous animals or natural catastrophes… We soon arrived at the point where Katsura river was merging into another one and got big and wild. Up in the mountains there is an amazing viewpoint and we could see the huge torquise river surrounded by mountains. This is one of my favourite places. This time we didn’t went to Hozukyu Station to take the train back. Since Katsura river is flowing to Kyoto’s famous Arashiyama and right next to it was a hiking trail, I decided to 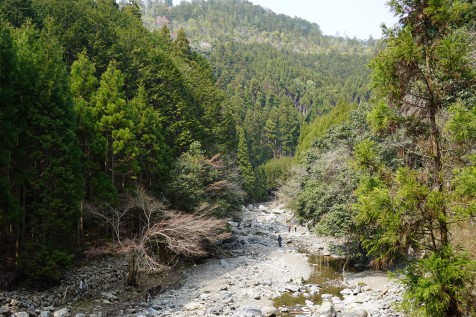 walk back to Arashiyama. We crossed a bridge to the station and when I was planing the trail, there were 50 m of connection between train station and trail missing. I just wanted to give it a try, otherwise we could take the train anyway. We couldn’t find a trail, but a station guy sent us along the river and told us that after the big typhoon last year the trail was messy, but he already sent two foreigners there today and they didn’t came back! Great! The trail was heavily damaged, but they already created a new one with marks and guidance ropes. We had to climb up the mountain and it was hard and kind of unexpected. From the 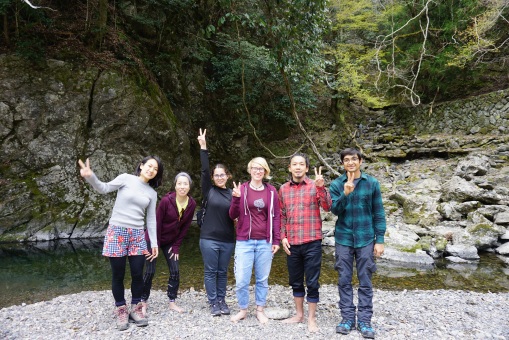 peak on the trail got wilder and wild wilder. With each step it went harder to continue. We passed a railway bridge and few meters after it the trail went that messy, that it started to be quite dangerous. There were paths appearing and at the same time they disappeared guiding us into canyons. Due to all the fallen leaves it was extremely slippery. We were fighting for each metre and we had still 4 km to Arashiyama left. It went dangerous and I arrived at my borders. Slightly the same feeling I had at Ponponsan and I just wanted to leave the situation as soon as possible. I guess this feeling is a kind of fear. It was getting dark soon as well and my brain was working

hard to find a solution. We were trapped. We couldn’t cross the river, going back was already too far and also difficult and the trail wouldn’t get better, especially in darkness. Sayaka suggested to cross the railway bridge and since the other river shore looked very nice this seemed to be the only solution. Obviously, without being able to read and understand any Japanese it was strictly forbidden to cross this bridge and if we got 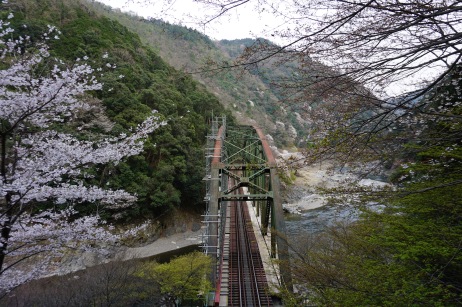 caught we would be in serious trouble. As a foreigner it was even more risky to loose the visa. We climbed the bridge, walked and arrived at the other side. I was relieved and the others as well. I don’t care about breaking rules, as long as they are not that important like skating in Tennoji park, but this was a different level. We walked along the railway tracks, which made me feel uncomfortable as well, but at least we easily make kilometres. We split a little bit away from each other and lost side contact. Yoshi, Tomal and Bidhya were behind us. I was walking with Sayaka and a few meters in front of us was Yumi walking. Than it happened. I got a

message from Yoshi “Train is coming”. Panic. I shouted to Yuji and jumped down the steep river shore sliding behind some bushes. Sayaka directly behind me. We sat at the shore and could hear the train. These railways are no public operating trains, it was kind of a nostalgic panoramic line for tourists, so the train was slowly and then it stopped directly above the place we tried to hide. I could see the railway engine. Could they see

me? I was close to a heart attack. What happened? Why did they stop? It couldn’t be coincidence that they stopped here! Did they see the others walking on the tracks? I was sure they saw us, stopped and would come out to pick us up and bring us to the police at the next station. I’m a coward and yes I was afraid. How could we get into this situation? We waited. And waited. Nothing happened. After a few minutes the train slowly continued and disappeared. We waited for the others behind us, they were walking at the river shore, which wouldn’t be forbidden. Later they told us the train was also stopping next to their position. What an unbelievable coincidence. We continued walking and it went dark. On the other riverside we could see a Ryokan (traditional hotel) and it was one of the most beautiful sceneries I have ever seen! We

arrived at a railway tunnel and this time I was sure we couldn’t pass it. I went down to the river. It was dark. Nobody was there. The others texted they passed the tunnel. The river shore ended abruptly. There was a wall of rocks. We had only two options: Crossing the tunnel or swimming. Swimming would also bring us into life danger, so we climbed up to the tunnel. I was extremely afraid. The tunnel was tight and only fitting a train and we had no idea how long it was. There was no option, now in darkness the way back was

blocked. Sayaka and me were counting down and running. Running through the tunnel and praying. The tunnel seemed not to end and suddenly we ended up at a station where the others were awaiting us. We were safe. No more violating rules. How wrong I was. We just stepped into the next trap. The train station was very small and local, but closed! And there was a fence around with huge cons like in a jail. We couldn’t follow the tracks, from now on we entered the city and it would be dangerous since it was merging tracks used by fast JR trains. In darkness we tried to find a way through the fence and there was a gate without spikes on top. We ended up in a bamboo garden and had to pass a fence made of straw. There was a hole and we managed to sneak through it like animals, trying not to get observed by passing tourists. We were on a road. We 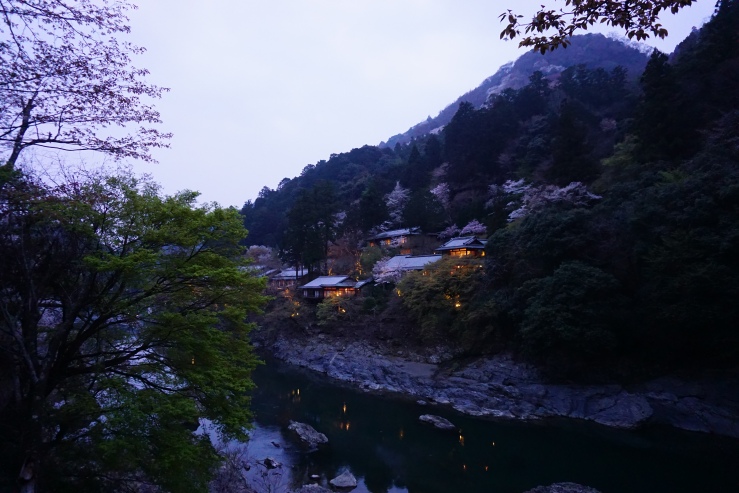 managed. My kneed were shaking. I didn’t care about anything, I was just happy to be out of this whole situation which went worse and worse. We walked back to Arashiyama Station and Sayaka, Yoshi, Tomal and me got some food from the Konbini to have a small Hanami even if it was late and dark. I slowly calmed down and enjoyed being around my friends. Today’s adventure was a mixture between nightmare and breathtaking moments. I’m not proud to have violated to many rules, but while walking along the railway tracks I enjoyed one of the most beautiful views I have ever seen in my life. The Katsura river was deep and strongly blue shining surrounded by high mountains which were spotted by violet and white flowers. This view burned into my brain and it will be one of the moments I will never forget in my whole life.