Hiking Bukhansan. Mt. Bukhan is located in north of Seoul. There are three major peaks, 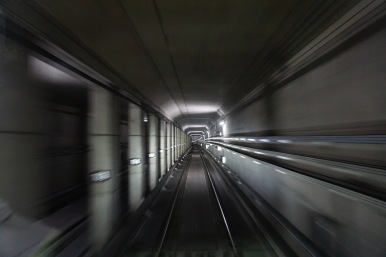 Baegundae (836.5 m), Insubong (810.5 m), Mangyeongdae (787.0 m). Because of its height and the fact that it borders a considerable portion of the city, Bukhansan is a major landmark visible from most city districts. The name “Bukhansan” means “mountain north of Han River”, referring to the fact that it is the northern border of the city. Bukhansan is the highest mountain within Seoul city boundaries, so for me the perfect location for my obligatory Sunday hike. This time I went alone and was very happy for the opportunity to escape 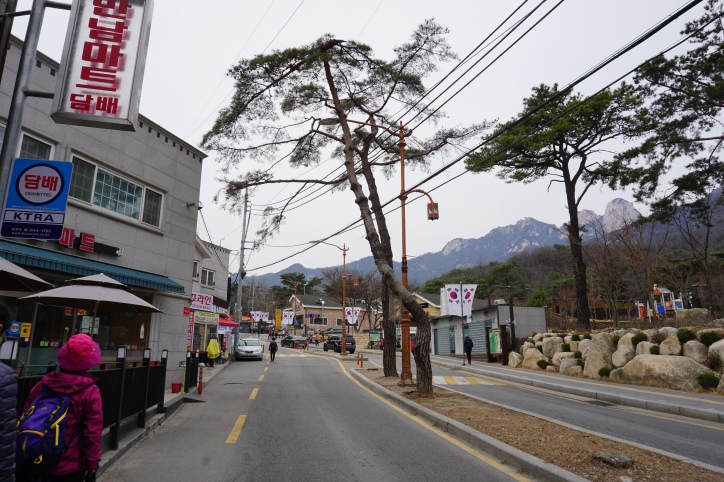 the city, the travellers and for being on my own. The access was very easy, I only had to take a special train. After a few minutes I realised this train was a fully self driving one, where I could watch how the train jetted on the tracks. It felt like on a roller coaster. I arrived at the final station, where a lot of hikers started with me into the the trail. To get to the trailhead I had to walk along a road and it already went up. At the trailhead I was already sweating and this was just the beginning. I climbed one rocky stair after the next one and got slightly higher. There were many people on the 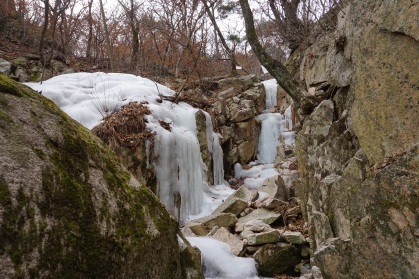 trial and all of them looked as motivated as me. I wondered that they didn’t greet and it this silence was kind of strange. Maybe Koreans don’t do that or maybe they were just too shy. The air went colder and I could see the blank rocks turning up ahead of me. My heart jumped when I saw many rock climbers on a neighbour peak. I more and more miss climbing and right now I felt a deep jealousy. I continued climbing, the stairs were manmade and killing my legs, but the summit was still far away. There was a managed shelter shortly 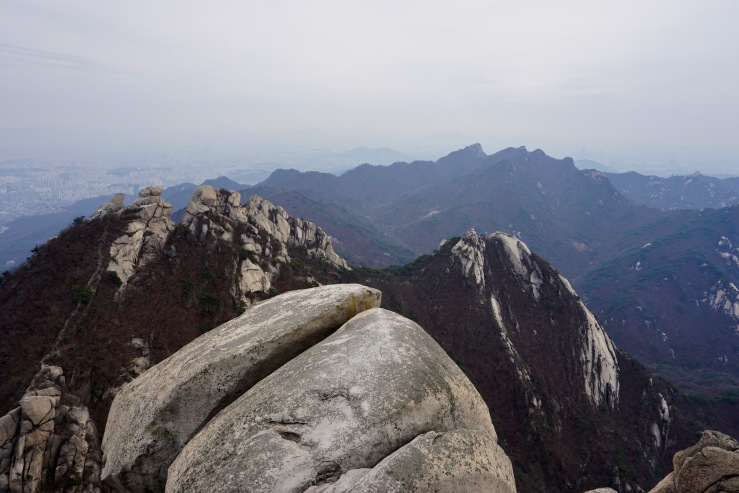 before the peak and it was time for lunch. I joined a father with his two sons on a picnic bench and took out my rice balls. Like in Japan they looked suspicious, but after a while 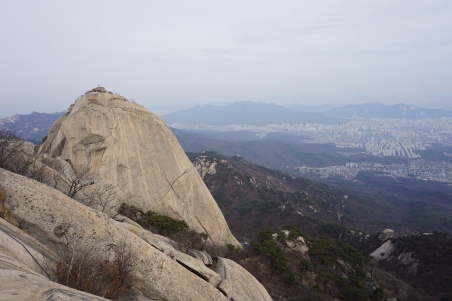 they started talking to me. I wondered in Korea it took much longer. With a belly full of delicious rice balls I continued to climb the last meters to summit. Like on the last hike the mountains were blank and rocky. They were incredible steep and I felt like a bird. Again I could see the city of Seoul on one hand and a beautiful mountainous scenery on the other hand. It was that steep that I got a little bit dizzy. There were railings installed to provide the climbers, but this trail was rather rock climbing than 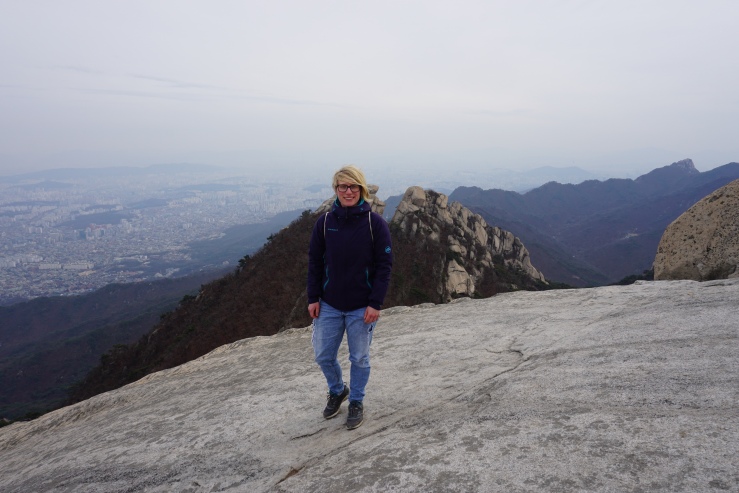 hiking. Even though the mountains were as high as in Kansai region, the feeling of height was completely different due to the blank steep rocks. It was just amazing. Slowly I 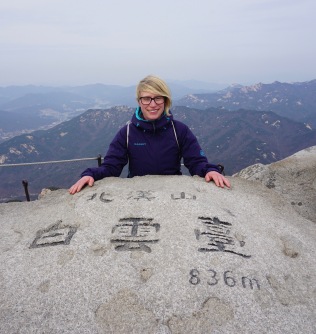 climbing to summing, while enjoying any single step. The view was amazing! This was the most amazing mountain I ever climbed. At summit I made a second break and ate my last rice ball while enjoying the breathtaking view. I could see a temple far away in the mountains and I really would like to go there. I was not sure if this one was on my trail along the three peaks. I climbed down the steep rocks back to the trails and continued hiking through the mountains. This was the mountain’s back side and there weren’t any other people. At a rest area I decided to try to get to go to the temple I saw and went down into the valley. It was already late and I was a little bit worried if this might have been the wrong decision. Unfortunately the temple on the maps wasn’t the same one I saw 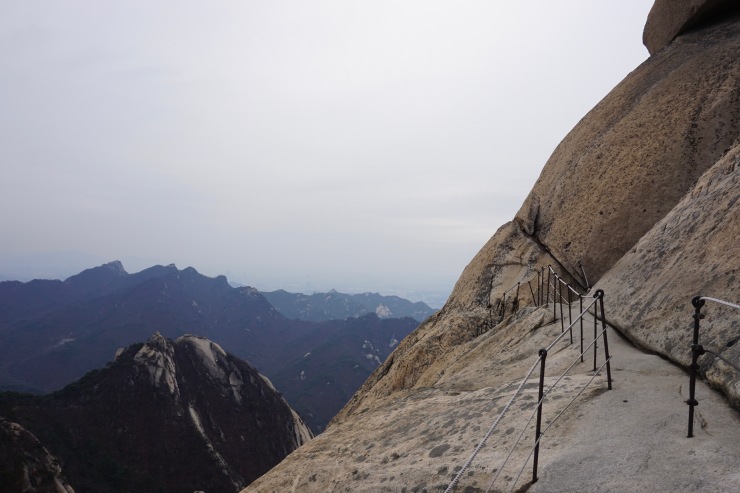 from the summit. The disappointment was high. Climbing back to the rest area and the trail was super challenging and I sweated a lot. The sun slightly lost its power. I followed 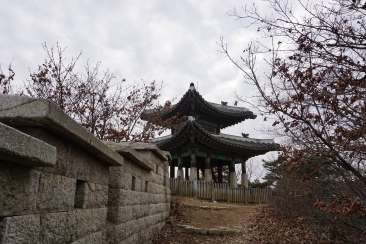 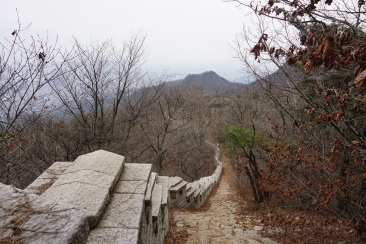 the trail along the ancient city’s wall, which was as long as my eyes could see. I was walking at the mountain’s horseback and could enjoy an amazing view of the city while 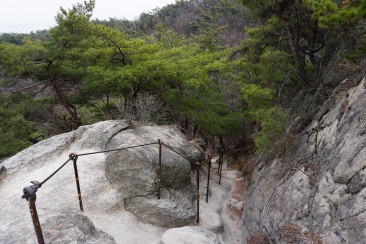 walking along the wall. I passed all the mentioned peaks while sun was starting to set. The trail back to the station was again made of steep rocky stair through the woods. There was no one around me and I could feel how my legs got tired. The last kilometre I had to concentrate on every single step
and to focus the muscles in my legs. I was happy when I arrived at the trailhead’s gate and just in that moment a bus came. I managed to ask the driver for the way and just jumped in. I was extremely lucky that I could skip the last 3 km on the road. The bus wasn’t driving to the 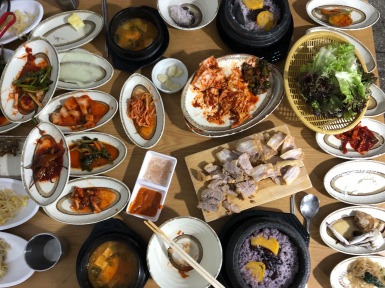 station I wanted, but to another one which I could take. Back in Seoul I was as tired as hungry. My friend Eun Taek and me went to a nearby restaurant. The dinner was a main dish and twenty-one side dishes, which you could re-order as much as you could. It was as crazy as tasty. There was not even a tiny bit a space left on the table. We couldn’t manage to finish everything. I ate so much, that I just felt into my bed. Unable to move anymore with this full belly.