My friend Anka and me decided to go for snowy vacations. Since we were flexible we just booked a blind booking via Eurowings. The clue was we could choose a category which was “snow” in our case. This included cities like Prague, Zurich, Zagreb and Munich. Unfortunately we got Munich, which was a bit pity, cause I prefer leaving Germany. We agreed immediately we will go to the mountains and we will camp. So we hired a station wagon for the case we won’t be able to sleep in the tent.

I was really exited about the idea to go for camping in snowy mountains. For one, I love snow and the mountains, for second I never had this kind of experience before. Anka was the only person I knew which had proper equipment for that kind of trip, cause she already climbed Mount Kilimanjaro. Our flight was in the morning from Cologne airport.
There’s a line which goes to Cologne airport directly within a hour departing from Bochum. The night before was stormy, but there no delays published. In Düsseldorf the train stopped and they said it won’t be possible to get to Cologne, cause the trails are damaged due to the storm. Great, when did they realised? In that very moment? It’s always the same issue with Deutsch Bahn, you can’t trust them. We went to DB Center, which was crowded, cause there was no train in general going south. While waiting I realised that the service center can’t solve our problem by now and we could miss the flight. I spoke to a foreign couple and people with much luggage which looked like they might need to go to the airport as well. It worked, in the end we were five persons. Unfortunately it was exactly one person too much to fit in one normal taxi. I run outside and asked for a big taxi explaining our problem. One driver just said bring them, so I run back and brought the others. We all squeezed ourselves in one taxi (which is normally

strictly forbidden in Germany). It took us one hour by car to get to the airport. Since we could divide the costs it was not that expensive in the end. I had my student ticket, so I wasn’t paying anyway, but the other paid twice in the end. We arrived in time and could check in relaxed. At the gate they announced the aircraft was delayed. One hour later they announced that a crew member was missing and they could not start. In the end they solved the issue professionally and we could start. In Munich we searched for the company where we rent the car. Not that easy. At the service point there was a second problem I secretly expected. Anka did the car reservation with her credit car and she was using a prepaid credit card, which is not valid for the deposit. Of course it was also not possible to change the reservation on my name and credit card. I already knew that

kind of issue from Mallorca. The solution was as easy as costly. You buy an extra insurance and than it’s fine. Luckily we got upgraded at the same time and got a brand new Ford Kuga which was perfect for our project. In the outskirts of Munich we went to an outdoor shop for buying gas and bought lot of food in the supermarket. The delayed flight and and getting the car took a lot of time and we were hungry. So we decided to get a pizza first. It was the best pizza I ever had. We headed towards Mittenwald, the last city before Austria. It was already dark when we arrived, the small village looked like Harry Potter’s Hogsmeade and I just loved it. We found a nice public parking area on a hill with a great view of the village. It was just next to the ski lift. We prepared our mobile home and heated up some Glühwein. I really wanted to go for a small walk and enjoy the snow,  the night and snow soaked every kind of noise. We went out for like two hours and already figured out some nice places for camping. I was so excited that I wanted to get the tent right away.

The night in the car was quiet comfortable, we woke up by the noise of snowcat getting rid of the snow. After some time more and more cars came with tourists. Since we had a

lot of luggage and the hiking path was quiet steep, we decided to go for a hike fist and look for a proper campground. Afterwards we would take all the stuff and bring it to that place. It was amazing to hike in the snowy mountains. It was the right decision to let the stuff in the car first, cause it was very steep and slippery. We made a break in a managed

hut to get some hot chocolate while outside just started a snowy storm. We continued hiking and found a shelter on 1500 m. It was the place. I mean it was more than perfect. The shelter was not comparable with that ones in Sweden. It was a massive hut with a

door and no wind could enter the hut. We decided to hike back to the car a different way through the woods, which meant some extra kilometres. It was magic to walk through the snowy woods. Unfortunately it startet to rain, and by time the rain got more and more. There was no shelter and since we left the protective forest there was icy wind blowing in our faces relentlessly.

The rain got heavier and my ski clothes were soaking all the cold water and the blowing wind made me freezing. It took much more time to get 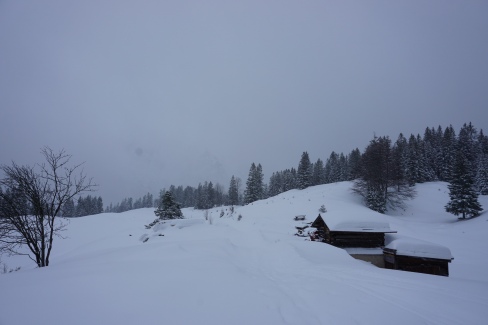 back to the car than expected. When we arrived at the car we realised that it will be impossible to get to shelter on top again. The rain was not stopping and we were cold and wet. So we decided to drive to Garmisch-Patenkirchen and go to a public bath. For one to get warm again and for second to dry our clothes. We took our heavy backpacks to the public bath and startet to blow dry our stuff. The other guest were staring at us and I won’t imagine what there were thinking of us what we are doing. All the lockers were occupied, but the stuff was very nice and we 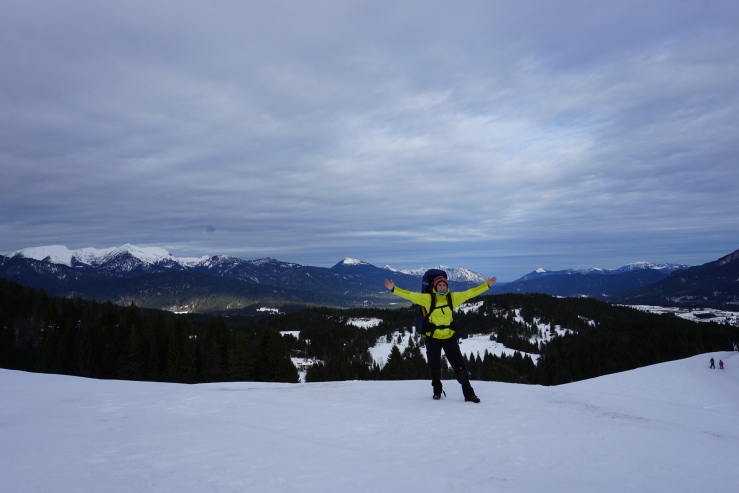 could enter an extra area which is usually for school classes and put all our stuff around. Sitting in the warm water was quiet nice, but after some time it got boring. But we needing give the clothes time for drying. The was a Turkish bath which was in a separate 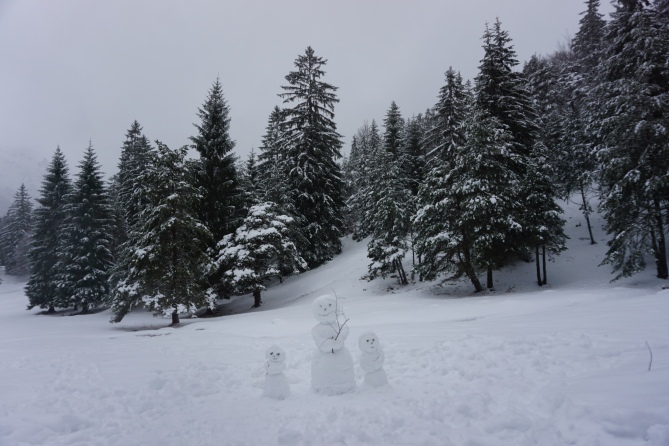 area. Each time you enter that area, you had to pay one Euro. In this area was just the Turkish bath and a shower, nothing else. So, we were kind of trapped there, because we
didn’t wanted to leave during cool down and pay for entering again. We spent two hours 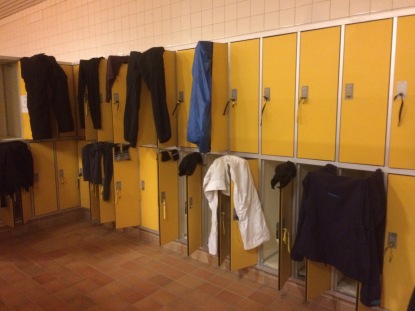 in the bath. Our clothes were almost dry. I was really happy and felt like a baby. Warm, clean and comfortable. We prepared dinner in the drunk while parking beneath the roof of a permant closed gas station in Mittenwald. Then we drove back to our parking lot and heated up some bottles of Glühwine while sitting in the car, chating and enjoying life.

This night we wanted to sleep on top of the mountain no matter what happens. Waking up by the snowcat again we had our breakfast in the car while tourists around were 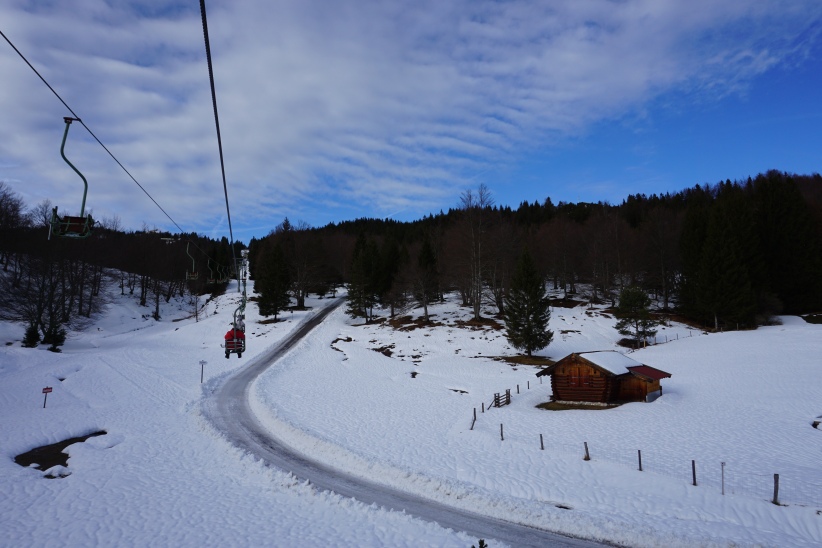 talking about the way we parked our car. They were complaining a lot, not knowing we could hear everything inside. I admit the way we parked the car seemed weird to people who never expected sleeping people in the car. It’s important to park the car in a way your feet are not higher than your head and that was the only position. I could not understand this trouble because there were a lot and I really mean a lot free parking lots right next to us. We grabbed our stuff and in the end our backpacks were overloaded. So we decided to use the ski lift to 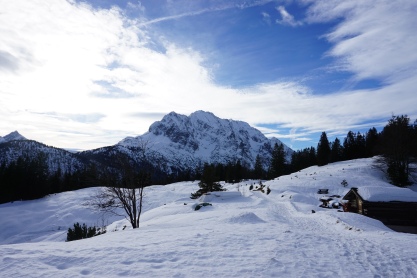 skip to first 700 m of ascent. The ride on the lift was an adventure itself, it looked quiet dangerous how Anka sat there with her overloaded backpack. It took much more time to get to summit this time. The road was frozen and extremly slippery due to the rain yesterday and the backpacks were heavy. We arrived the shelter in the afternoon and there were still a lot of people. Most of than were skiing. We heated up some soup and enjoyed the the view while being packed in our sleeping bags. The last people left around 6 pm, when we

moved into the shelter and started preparing our sleeping site. We cooked dinner on my little stove. After dinner we went out with some cups of hot Glühwein. We stept in our sleeping bags again and watched the stars while laying on the bench and talking. We laid

there for hours. The sky war dark and bright. My sleeping bag did a really good job and I nearly fell a asleep in the end. At around 1 pm we moved into the shelter. I fell asleep immediately. Startled, I woke up. It sounded like the cabin was about to fly away. I got

panicked. We needed to climb down the mount very early in the morning, to get back to Munich airport in time. With this horribly storm outside and the icy roads it won’t be possible to get down safely. Maybe we could wait and take a train. I couldn’t sleep 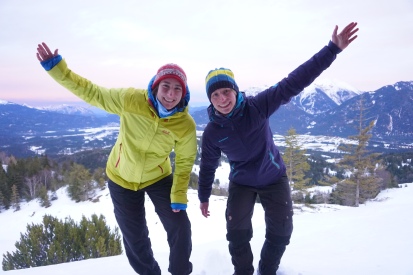 anymore. I was too worried and the storm did not stop. After a hour I needed to get out for a toilet. I was prepared for the worst. But it was relatively calm outside. The noise in the hut, was because it was standing on top of the mountain and braking the wind while making a dramatically sound. I was released and managed to sleep for some hours. At 6 am we had to wake up and got ready for the descent. It was still dark outside. The road was frozen, but it was not that bad at all. It took us around one and a half hour to get back to the car. We drove back to Munich, dropped the car off and flew back to Cologne. The end of our snowy adventure. 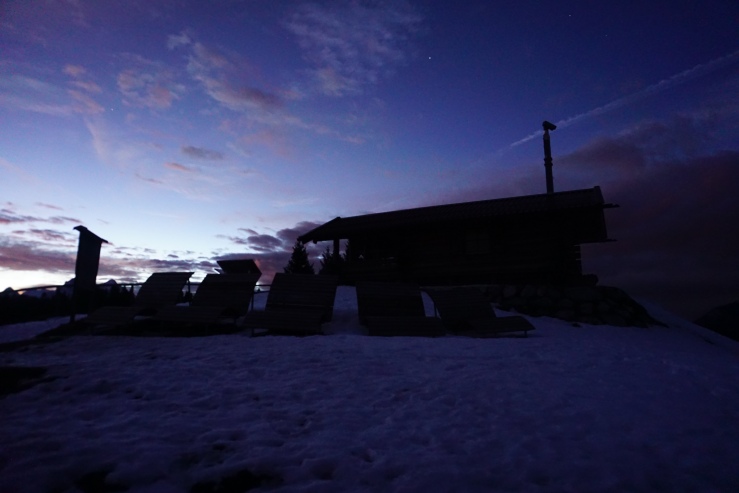